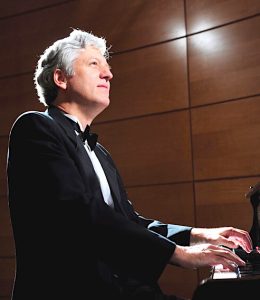 Pianist Brian Ganz will perform solo works of Frédéric Chopin, Polonaises, Mazurkas, Ballade No 1, Etude, and the Allegro de Concert. Then he will be joined by Li-Ly Chang for Mother Goose by Ravel and Dolly Suite by Faure.

Brian Ganz is widely regarded as one of the leading pianists of his generation. A laureate of the Marguerite Long Jacques Thibaud and the Queen Elisabeth of Belgium International Piano Competitions, Mr. Ganz has appeared as soloist with such orchestras as the St. Louis Symphony, the St. Petersburg Philharmonic, the Baltimore Symphony, the National Philharmonic, the National Symphony and the City of London Sinfonia, and has performed with such conductors as Leonard Slatkin, Marin Alsop, Mstislav Rostropovich, Piotr Gajewski and Yoel Levi.

The Washington Post has written: “One comes away from a recital by pianist Brian Ganz not only exhilarated by the power of the performance but also moved by his search for artistic truth.” For many years Mr. Ganz has made it his mission to join vivid music making with warmth and intimacy onstage to produce a new kind of listening experience, in which great works come to life with authentic emotional power. As one of Belgium’s leading newspapers, La Libre Belgique, put it, “We don’t have the words to speak of this fabulous musician who lives music with a generous urgency and brings his public into a state of intense joy.”

In January of 2011 Mr. Ganz began a multi-year project in partnership with the National Philharmonic in which he will perform the complete works of Frédéric Chopin at the Music Center at Strathmore. After the inaugural recital, The Washington Post wrote: “Brian Ganz was masterly in his first installment of the complete works [of Chopin].” The ninth recital in the series, scheduled for February 2, 2019, will feature the theme “Chopin: Recollections of Home,” highlighting works that express Chopin’s love for- and deep roots in- his homeland of Poland.

Mr. Ganz is on the piano faculty of St. Mary’s College of Maryland, where he is artist-in-residence, and is also a member of the piano faculty of the Peabody Conservatory. He is the artist-editor of the Schirmer Performance Edition of Chopin’s Preludes (2005). Recent performance highlights include Beethoven’s 4th Piano Concerto with the Waco Symphony Orchestra and Chopin’s 2nd Piano Concerto at the Alba Music Festival in Italy and with the National Philharmonic at Strathmore.

Tickets can be purchased by calling 301-933-3715 or by emailing musicalartsinternational@yahoo.com

Free parking in the back of the church

Handicap accessible, please call 301-933-3715 one day ahead to make arrangements