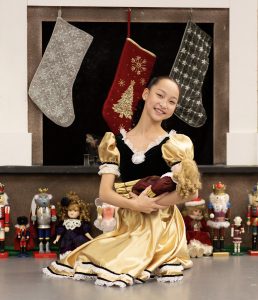 A bold remastering of Nutcracker is on tap this holiday season in a production that puts a distinctly feminist spin on the classic ballet by bringing to life a diverse mix of trailblazing and history-making women.

Silver Spring, Md. – A bold remastering of Nutcracker is on tap this holiday season in a production that puts a distinctly feminist spin on the classic ballet by bringing to life a diverse mix of trailblazing and history-making women. Billed as “Equal-Rights Night – Nutcracker with a Twist,” an original work staged by the prestigious Akhmedova Ballet Academy (ABA), the adaptation turns the standard Nutcracker and perennial Christmas favorite squarely on its head, swapping out demure maidens and a handsome prince for a group of some of the world’s most influential and courageous women, such as American abolitionist and political activist Harriet Tubman and feminist icon U.S. Supreme Court Justice Ruth Bader Ginsburg, the first Jewish woman on the High Court and a tireless advocate for gender-equity.

Akhmedova’s two-act ballet is set to Tchaikovsky’s Nutcracker Suite and features a Christmas Eve party scene -- but that is where its similarities to traditional Nutcrackers begin and end: Whereas the classic Nutcracker centers on a young girl’s awakening to the wider world and romantic love, ABA’s Nutcracker presents a story of female mentorship and self-empowerment. The ballet is set at the home of famed suffragist Elizabeth Cady Stanton, with RBG invited as the holiday gala’s guest of honor. Rosa Parks, Anne Frank, Nina Simone, Susan B. Anthony, Jane Austen, Ella Fitzgerald, Simone de Beauvoir, Emmeline Pankhurst and aviation pioneer Amelia Earhart round out the guestlist of barrier-breaking women, whose roles will be performed by ABA’s talented student dancers, ranging in age from [11 to 19] “Each of the great women showcased in our Nutcracker has a vital story to tell,” Akhmedova says.

In place of Clara, the Nutcracker’s traditional heroine, is Stanton’s daughter Harriot -- a role undertaken by ABA dancer Lucy Qian, a multi-award-winner at prestigious national and international ballet competitions. Harriot, as portrayed by Qian, cherishes not a toy nutcracker who will become the prince of her dreams, but a book containing the story of each female guest’s unique struggle for equality and justice, presented as a guide to young Harriot as she travels the world to learn about the lives of women and to mature into an author and suffragist.

“The need for persistence, courage and perseverance, as exemplified by these renowned and barrier-breaking women, and the importance of growing into one’s best potential are lessons that my faculty and I seek to instill in our young dancers every day,” Akhmedova says. “It is a message I would like audiences of ABA’s Nutcracker with a Twist, most especially girls and women, to absorb as well.”

ABOUT ABA: The Akhmedova Ballet Academy, a fixture in Montgomery County, MD’s performing arts community, dedicates itself to providing students with the finest quality ballet training using the Russian Vaganova method. Madame Jacqueline Akhmedova, ABA’s founder and artistic director, was a professional ballerina for more than 20 years, touring extensively in Europe and elsewhere and dancing every major role in the classical and contemporary repertories, as well as teaching Master Classes in the United States and abroad. She holds degrees in ballet performance, pedagogy and choreography. ABA students have won such prestigious competitions as the Youth America Grand Prix and the Prix de Lausanne and have gone on to successful careers in major ballet companies worldwide.

ABA's Nutcracker with a Twist premieres on December 18th at 7pm at the Cultural Arts Center Montgomery College in Silver Spring. Tickets go on sale for the public on October 18th at 9am.

Tickets can be purchased here