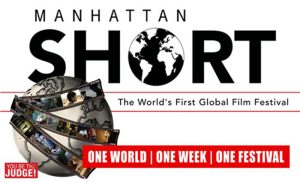 Ten short films have been selected from among 967 entries from 70 countries.  Now YOU get to choose which of these is best!  These “shorts” screen simultaneously in over 500 cities on six continents between September 22nd  – October 2rd.   The judges of these films are you, the audience.  After the screening, audience members will vote for your choice of Best Film and Best Actor.  Winners will be announced on the last day of the festival.  Every short film selected will automatically become qualified for the Oscars of 2023.  The directors and actors anxiously await your decision!  This evening will likely sell out, so get your tickets early.
MANHATTAN SHORT is a celebration of short films. Established in 1998 on the streets of New York City, today it is a worldwide phenomenon and the only film festival of its kind.
For accommodation requests, please contact the museum via email or at 301-774-0022.