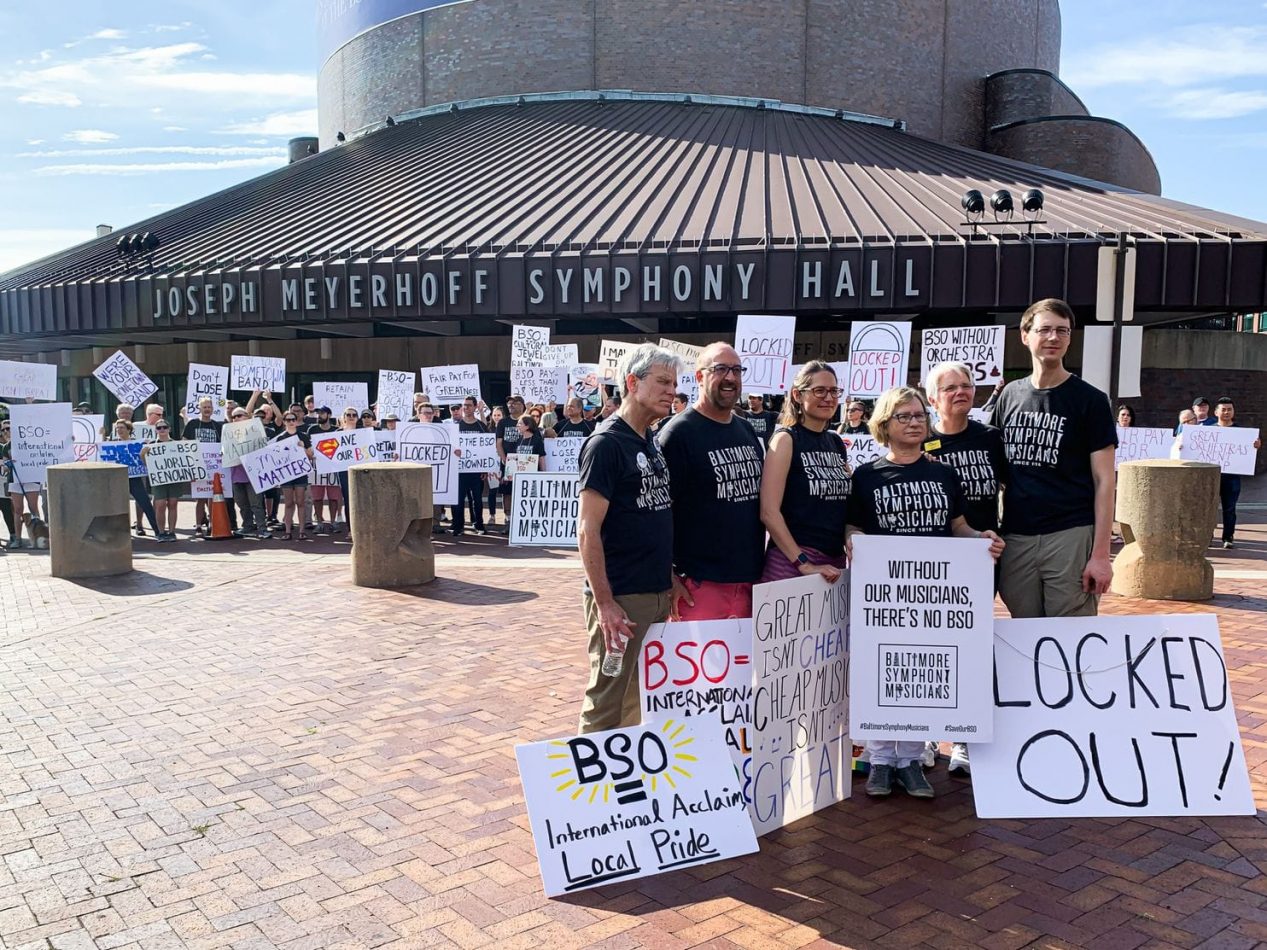 Picketing Baltimore Symphony Orchestra musicians in front of Meyerhoff Hall on the first day of the orchestra’s lockout. Negotiations will resume Friday; management plans to extend the lockout until Sept. 9.

Originally Published in the Washington Post on 06/17/2019 Written By: Anne Midgette It’s official: It’s a lockout. On Sunday night, the Baltimore Symphony Orchestra confirmed what it effectively announced on May 30: The musicians of…

Originally Published in the Washington Post on 06/17/2019
Written By: Anne Midgette

It’s official: It’s a lockout. On Sunday night, the Baltimore Symphony Orchestra confirmed what it effectively announced on May 30: The musicians of the orchestra are locked out.

On May 30, the orchestra announced that it would be canceling its summer season and ceasing to pay its musicians as of June 16. The musicians have been playing without a contract since September; still, the only way that the orchestra can legally stop paying them is to announce a lockout.

The orchestra’s news release went out late Sunday night, only hours before the end of the last day the musicians were to draw pay, and only a short time after the players themselves had been informed, according to Peter Kjome, the orchestra’s president and CEO.

Players and management are returning to the negotiating table Friday, in the presence of federal mediators, although the negotiations are not yet officially in mediation. Whatever the outcome, Kjome says that the lockout will end on Sept. 9, when the orchestra is scheduled to reconvene for the fall season. Musicians, however, are highly unlikely to resume work unless a contract agreement has been reached.

“To be out for 12 weeks and then come back and take the 20 percent cut they wanted to give us in the first place, would you be willing to do that?” said Brian Prechtl, a percussionist and co-chair of the BSO’s orchestra committee.

The lockout effectively achieves a goal that management announced it was seeking as early as October, when it proposed cutting the BSO’s season from 52 weeks to 40 weeks.

On May 24, House Bill 1404, which included provisions for $3.2 million for the orchestra over two years, and which had passed both houses of Maryland’s state assembly, was not among the bills vetoed by Gov. Larry Hogan (R), and the orchestra breathed a sigh of relief. However, according to Kjome, the money was not immediately forthcoming; he could not get a letter of intent from the legislature to present to the bank for a short-term loan.

The orchestra’s $60 million endowment, Kjome says, is already drawn to capacity, at a rate of 5.75 percent as well as a $5 million loan. “Our endowment trust,” he says, “views that further support without having significant changes to improve our business model is not fiduciarially responsible.”

Kjome asserts that the orchestra has lost $16 million in the past decade, and blames previous administrations for having drawn down the endowment ­significantly in the past. In 2006, he said, more than $20 million was taken out of the endowment at another critical juncture. “At that time,” he said, “the endowment was restructured to protect assets so that this would not happen again.” He added, “I think about where we would be today if we had those additional funds.”

Others say that Baltimore’s management and board have not done all they could to maximize donations and income, including an entire year during which the orchestra operated without a director of development, the organization’s chief fundraiser. The BSO is rare among American orchestras in having a full-fledged second home at Strathmore, in Montgomery County, one of the richest parts of the state.

“The orchestra management over a number of years has never fully tapped the significant potential that Strathmore represents,” said Greg Tucker, a strategic communications consultant who is a former PR director for the orchestra and was for four years a board member, until 2018.

And players believe the orchestra could still lean more heavily on the endowment. “They could be taking up to 7 percent by law,” Prechtl says.

As it is, Prechtl says, the orchestra will be saving $2.5 million on musicians’ wages and health care if it sticks with its plan of continuing the lockout until September. “That’s all ­coming out of musicians’ pockets,” he says. “Our line of the budget has remained flat for the last 10 years.” The musicians made several significant concessions over a decade of contract negotiations; their contracts have only recently returned to 2008 levels.

There is much debate about the 52-week season these days. Several orchestras, including ­Detroit, St. Louis and Atlanta, have cut back their seasons — Detroit, in the wake of a painful six-month strike in 2010 to 2011; Atlanta, after a lockout in 2012. (The orchestra was locked out again in 2014). The 52-week season is, in fact, a relatively recent development, dating from the 1970s and 1980s; before that, many orchestral musicians worked second jobs in the off­season.

According to Prechtl, Detroit’s success is because it turned to best practices in marketing and development, and showed “a ­vision for what the orchestra can be.” Detroit, which has balanced its budget for the past six years, is doing well “not because of the 40-week season; it’s in spite of it.”

The musicians will return to the picket lines Tuesday.