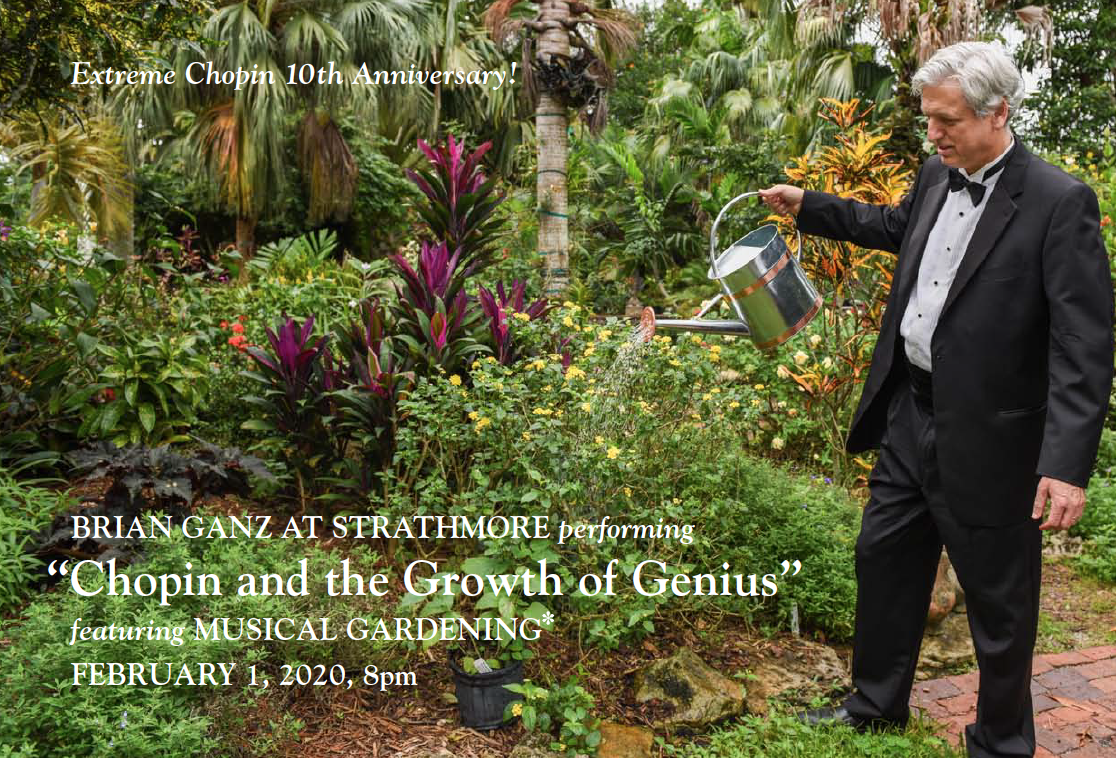 Brian Ganz is widely regarded as as one of the leading pianists of his generation. He will celebrate a decade into his sojourn of performing the complete works of Frédéric Chopin with “Chopin: The Growth of Genius” at The Music Center at Strathmore at 8 p.m. Saturday, Feb. 1, 2020.

North Bethesda, MD, Jan. 9, 2020 — Internationally acclaimed pianist Brian Ganz celebrates a decade into his sojourn of performing the complete works of Frédéric Chopin with “Chopin: The Growth of Genius” at The Music…

North Bethesda, MD, Jan. 9, 2020 — Internationally acclaimed pianist Brian Ganz celebrates a decade into his sojourn of performing the complete works of Frédéric Chopin with “Chopin: The Growth of Genius” at The Music Center at Strathmore at 8 p.m. Saturday, Feb. 1, 2020. The entire concert will be marked by Ganz’s signature “musical gardening”: Ganz will showcase Chopin’s growth as a composer by showing how early waltzes, polonaises, nocturnes, and marches demonstrate the seed of his genius, followed by more mature examples of the same genres. This is the first time Ganz has employed this technique for the course of an entire performance. “I’m especially excited to alter this year’s concert by foraying into the technique and growth of Chopin’s musical works over the years,” said Ganz, who will perform five episodes of musical gardening – three before intermission, and two afterward. “Part of the concert will feature a few of Chopin’s most well-recognized compositions, including the famous Funeral March and Polonaise-Fantaisie, as well as the brilliant Waltzes, Op. 34, and the gloriously expressive Nocturnes, Op. 27,” he said. Ganz began his “Extreme Chopin” quest in January 2011 with a sold-out recital in partnership with the National Philharmonic at The Music Center at Strathmore. He has since maintained a brimming concert schedule, representing his unique niche as perhaps the only pianist to perform Chopin’s entire oeuvre. “I believe Brian is the first musician to attempt to perform all of Chopin’s works,” said Piotr Gajewski, National Philharmonic music director. Ticket prices are $29-$79, free for young people age 7-17. and college students pay $10. There is a new 25% discount for military and veterans. Strathmore is located at 5301 Tuckerman Lane, North Bethesda. For more information or to purchase tickets, visit www.nationalphilharmonic.org or call 301.581.5100.

As for a decade of performing Chopin’s works? “Initially, I thought it would take me 10 years to perform Chopin’s full repertoire,” said Ganz. “We had hoped to perform multiple Chopin concerts each year, but great endeavors take years, so I’ll be providing Chopin concerts for audiences to enjoy for a few more years. Perhaps I’ll have performed all of Chopin’s works by year 15!”

The Washington Post has written, “There isn’t much about Chopin that Brian Ganz doesn’t know. His delight and wonder in this music seems to grow, apparently without bounds, as time goes on.” As Ganz will focus on comparing Chopin’s older works to his newer, more mature works, audiences will enjoy a repertoire that includes mazurkas, polonaises, and nocturnes before intermission. He will compare the earlier Mazurka in C Major, Op. Posth., and Mazurka in A-flat Major, Op. Posth., to the newer 4 Mazurkas, Op. 33; the initial Nocturne in E minor, Op. 72, No. 1, to the more recent 2 Nocturnes, Op. 27; and the early Polonaise in B-flat Major, Op. 71, No. 2, and the Polonaise in C-sharp minor, Op. 26, No. 1, to the later Polonaise-Fantaisie, Op. 61.

“If I could only take one genre of Chopin’s music with me to a desert island, it would be the mazurkas,” said Ganz. “Okay, that’s partly because there are more of them than any other genre Chopin wrote! But truly, they are Chopin’s creative laboratory. He takes more risks and does more musical experimenting than he does anywhere else. The mazurkas I’ll be playing at Strathmore in February make a sumptuous feast of strange and beautiful miniatures.”

Ganz also thoroughly enjoys polonaises: “The polonaises are in general better known to the public than the mazurkas, perhaps because they tend toward grand, noble gestures full of majesty and dignity. I’ll show how the early polonaise demonstrates the seed of Chopin’s genius, and how that comes to full flower in the mature polonaise,” said Ganz.

Ganz is well on his way with his “Extreme Chopin” quest to be the first to perform all of Chopin’s 250 works. February marks the beginning of his tenth year playing Chopin’s famous (and not-so-famous) works, and Ganz has been captivating concert audiences of 2,000-plus since he began the quest. Of the lesser-known works, Ganz says, “There’s something beautiful in everything Chopin wrote. In my journey through Chopin’s complete works, I will play every single note he composed, and this includes all the works he composed along the way to artistic maturity.”

Ganz’s fondness for Chopin precedes him. During an interview with the Chester County Press, pianist and former Ganz student Jennifer Nicole Campbell said that during her training with Ganz at Peabody, he was known as “the Chopin guy. [Brian] introduced me to a whole new way of thinking about music. He was extremely conscious of everything in life being put into the music. I knew right away, even before I applied to the school, that he was my teacher,” Campbell said.

Ganz sometimes brings his entire collection of Chopin’s music to a performance so that he can accept requests from the audience. “One of my lifelong goals has been to study every single note Chopin composed,” Ganz said. “This project gives me a lovely framework within which to reach that goal.” In an exuberant review of an all-Chopin recital Ganz played at the Polish Embassy, The Washington Post wrote, “One comes away from a recital by pianist Brian Ganz not only exhilarated by the power of the performance but also moved by his search for artistic truth.”

In 2010, Ganz visited Poland, invited by the renowned conductor Miroslaw Blaszczyk to
play with the Filharmonia Slaska and Filharmonia Pomorska. Visiting Chopin’s home country affected Ganz profoundly. “Chopin is Poland’s national treasure. His face was pictured everywhere, sometimes with no name under it and no caption of any kind. It is almost as if he is the air people breathe. This was profoundly satisfying to me, because he has always been the air I breathe,” Ganz said. “I visited the church where his heart lies in Warsaw. I visited the monument where outside concerts take place under a graceful, sweeping statue of him. I took a taxi to his birthplace in Zelazowa Wola. The whole experience was a pilgrimage for me.”

Ganz’s Chopin inspiration started as young as age 11. “Chopin’s music is the language of my soul, and I have dreamed since childhood of someday performing all of his works,” said Ganz, who is widely regarded as one of the leading pianists of his generation. In an article about the project, the Baltimore Sun wrote: “The boy was 11, already well along in his process of discovering music, when he found himself alone at home one day listening to Chopin’s Ballade No. 1 in G minor, Opus 23. Something in the piece struck Brian Ganz like a bolt from stormy skies.” Ganz recounted that moment, saying, “How can it be so beautiful that it hurts? That was the moment that I like to say Chopin wounded me.”

Ganz has shared First Grand Prize in the Marguerite Long Jacques Thibaud International
Piano Competition and won a silver medal in the Queen Elisabeth of Belgium International Competition. He has performed as a soloist with such orchestras as the St. Louis Symphony, the St. Petersburg Philharmonic, the City of London Sinfonia and Paris’s L’Orchestre Lamoureux and under the direction of conductors such as Leonard Slatkin and Mstislav Rostropovich. He is a graduate of the Peabody Conservatory of Music, where he studied with Leon Fleisher. Earlier teachers include Ylda Novik and Claire Deene.

Gifted as a teacher himself, Ganz is on the piano faculty of St. Mary’s College of Maryland, where he is artist-in-residence, and is also a member of the piano faculty of the Peabody Conservatory. He is the artist-editor of the Schirmer Performance Edition of Chopin’s Preludes (2005). Recent performance highlights include Chopin’s Piano Concerto No. 2 at the Alba Music Festival in Italy and with the National Philharmonic at Strathmore, Mozart’s Piano Concerto K. 466 with the Virginia Chamber Orchestra and the Annapolis Symphony, and a solo recital for the Distinguished Artists Series of Santa Cruz, California. Ganz has also been a member of the jury of the Long Thibaud Competition in Paris.

National Philharmonic recently announced its “Thank You for Serving Program” for all active duty military, reservists and veterans and their families. Military personnel may buy tickets for any National Philharmonic performance for themselves and their family and receive 25% off using promo code THX25. Tickets must be picked up at the box office with Military ID. Other restrictions apply. To purchase tickets for this performance and for information about the Philharmonic’s upcoming season, please visit nationalphilharmonic.org or call the Strathmore Ticket Office at 301.581.5100.