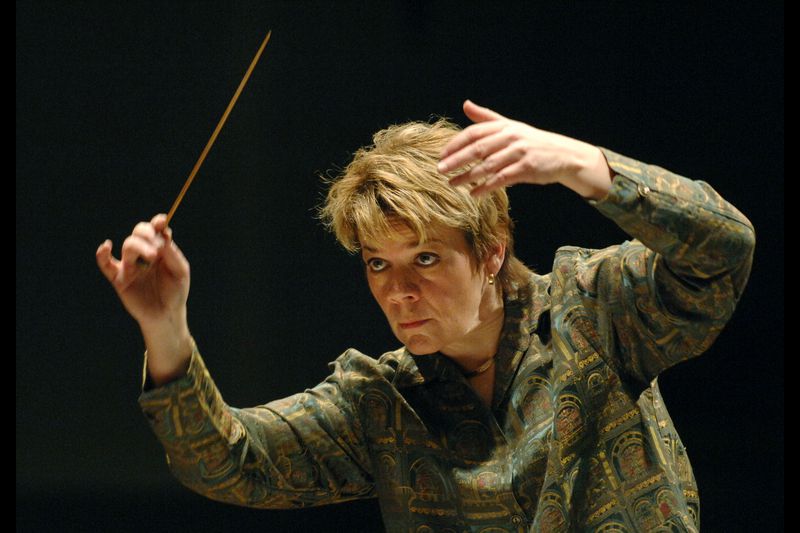 Marin Alsop is the BSO music director designate, conducting a rehearsal of the Peabody Symphony and BSO musicians at the Peabody Institute in 2006

Originally Published in Baltimore Sun on 02/26/2020 Written By: Mary Carole McCauley After 14 years presiding over the podium for the Baltimore Symphony Orchestra, Marin Alsop is stepping down during a critical junction in the…

After 14 years presiding over the podium for the Baltimore Symphony Orchestra, Marin Alsop is stepping down during a critical junction in the organization’s history.
Alsop, 63, will put down her baton as music director of the Baltimore Symphony Orchestra when her contract expires Aug. 31, 2021, the organization announced Wednesday. Instead, she will assume the title of music director laureate and OrchKids founder.

The organization will conduct an international search for Alsop’s replacement, but Peter Kjome, the BSO’s president and CEO, said the board of directors doesn’t expect to have a successor named before she relinquishes her music director role.
Alsop was rehearsing Wednesday in London and declined to comment immediately about her motives or her plans. But in a news release, she said: “The Baltimore Symphony Orchestra is one of the world’s great orchestras and I have been proud to have served as its artistic leader for the past 14 years.”

Not only was Alsop the first woman to land the top gig at a major American symphony orchestra — her appointment in 2007 made international headlines — she also will be the second longest-serving of the 12 music directors who have been the artistic head of the organization since the BSO was founded in 1916. In 2005, she became the first conductor to win a MacArthur Foundation Fellowship, commonly known as a “genius grant.”
The announcement of Alsop’s departure comes just two days after the BSO rolled out a six-year plan designed to restore the orchestra to fiscal solvency after more than a decade of recurring deficits that averaged $1.6 million annually. The organization must convince audience members, donors — and critically, state legislators and Gov. Larry Hogan — to provide the millions of dollars of funding that will be necessary for the turn-around effort.

Read the full article at www.baltimoresun.com