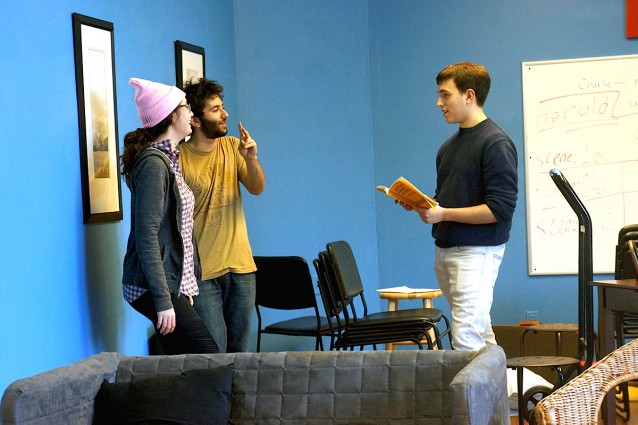 The Highwood Theatre has always strived to give students opportunities to shine in different areas of a performance such as being part of the production or on the technical crew. Yet the Silver Spring-based…

The Highwood Theatre has always strived to give students opportunities to shine in different areas of a performance such as being part of the production or on the technical crew. Yet the Silver Spring-based theater group had never let a student direct a show from the proposal phase to the final curtain call–until now.

Beginning this fall and running until March, the company will showcase three performances helmed by students. As a part of the inaugural Student Directing Fellowship Program, participants get to mimic the process of professional theater productions. “We wanted to give students that are really interested in pursuing (directing) as a career in the future an opportunity as students to really take the process from the very beginning through the production,” said Matthew Nicola, artistic director.

In March and April, students, between eighth to 12th grade, submitted proposals for productions fitting into the 2016-17 season theme: “City Dreams: Exploring the hopes, failures and dreams of life in the city.” Finalists met with Highwood staff for formal interviews in late April to early May to discuss their vision and how they would structure casting and rehearsals. “I think, first and foremost, what was important in those applications was getting a clear sense of how dedicated and committed these students were,” Nicola said.

Executive Director Kevin Kearney said he searched applications wanting to know what prospective fellows hoped to get out of the experience. “I think I was really looking for students that had a unique reason for applying rather than just experience and another (play) on the resume,” he said. “They wanted to do it because they wanted to bring a show to life or they wanted to genuinely learn more about the process or they genuinely wanted to make friends in the community.”

Three students were chosen for the program. Mae Gilligan and Christopher Brown will be directing shows with Highwood’s Students’ Theatre, while Madison Middleton will be taking on a professional production.

Mae initially proposed the semi-autobiographical Larry Kramer piece “The Normal Heart,” which focuses on the HIV-AIDS crisis in the early 1980s. Because it has such a large cast, producers suggested she try Jonathan Larson’s “Tick, Tick… Boom!”, a semi-autobiographical story of a struggling composer in New York City.

The 16-year-old Montgomery Blair High School student, who is in the communication arts program, recalls liking theater since she was little and attending area shows. While she has acted before, she prefers being behind the scenes and in the director’s chair. “I’m just really excited to be getting hands on directing experience with a committed cast because I haven’t gotten the opportunity to direct in any venue outside of school and this is an actual theater company,” she said. “I’m really excited to work with people who are really passionate about theater.” “Tick” is set to be performed Nov. 4-13.

Christopher, a student at Walt Whitman High School, will helm the Arthur Miller play “All My Sons,” with performances set for Feb. 24 to March 5. Set in the post-World War II era, family tensions boil over after faulty aircraft equipment leaves multiple soldiers dead in a crash. Christopher was unavailable for comment.

When Madison applied for the fellowship, she proposed directing Naomi Iizuka’s “Polaroid Stories,” a gritty play of vignettes involving drug users and addicts. During her interview, producers asked her if she wanted to direct the professional show of ”night, Mother’ by Marsha Norman. The play focuses on a daughter who tells her mother she plans to commit suicide later that night. “I had known that Matt (Nicola) had wanted to do ‘night, Mother” forever,” the 16-year-old said. “He always wanted to do it. He doesn’t know this, but he is the one who got me to read it two years ago. So when I heard that this amazing show was being handed to me, I immediately was so excited.”

The Fusion Academy student was initially a very shy kid, but got the chance to play Toto in her preschool’s production of “The Wizard of Oz.” “This shy kid just blossomed, and I was hooked,” she said. “Ever since I was 5, I have loved theater so much. …As a little kid, you just want to play. You just want to transform and to take people on a journey, but at this point of my education, it’s a lot about human vulnerability and tapping into all of these different perspectives and really, in the rehearsal process, breaking everything down to such a point that it just becomes so true and so genuine.”

With run dates of Sept. 23 to Oct. 2, rehearsals will begin at the end of August with the two roles being cast. “It’s extraordinary because both of these (actors) are willing to work with someone younger than them which is something I was really worried about,” she said. “I really like the energy that has so far come together.”

Madison hopes to see how her leadership skills can evolve and what she can learn from directing a play. “Leading a backpacking trip is different than leading an intense emotional script,” she said. “I would hope emotionally I could evolve and artistically I can evolve to see even more complexities within texts.”

Kearney said he is looking forward to seeing the students’ visions come to life. “That’s the payoff for us, and for them, is really to see their vision from the very beginning and see them work really hard at it and commit themselves to it and then seeing that reflected in the final shows,” he said. “The audience loving it and the parents loving it and the actors having a great experience.”

Nicola is excited to witness the fellows grow as artists. “A lot of them have so much potential and have so many great ideas to offer, and I am really excited for them to take those ideas and really see them evolve,” he said.

Each production is very different and audiences will get to see high-quality plays produced entirely by students which Kearney finds unique. “The audience is going to see students commit themselves to these productions like they don’t see anywhere else,” he said. “We give the students a lot of responsibility and expect the students to really commit and that really shows in the final product.”