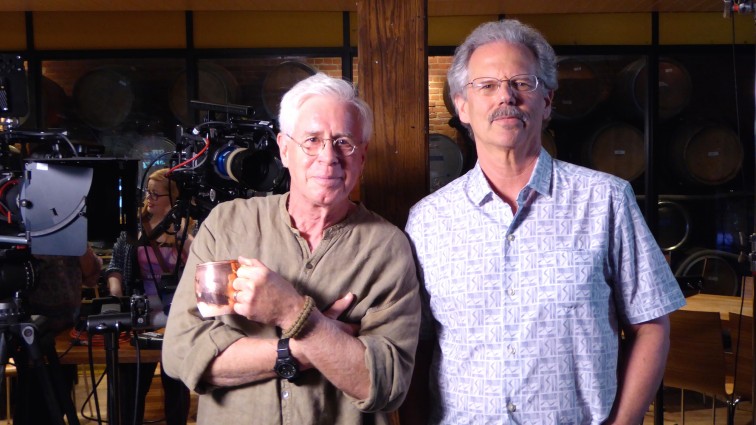 And What a Time It Was

Jay Schlossberg wants to take us back in time to an “era of cultural, social and political upheaval.” During those years--from 1961 to 1983, he and countless other mostly teens and twenty-somethings were steadfast…

Jay Schlossberg wants to take us back in time to an “era of cultural, social and political upheaval.” During those years–from 1961 to 1983, he and countless other mostly teens and twenty-somethings were steadfast fans of the free-form progressive radio station that rocked the metropolitan area’s airwaves from the Triangle Towers apartment building in downtown Bethesda.

“Feast Your Ears-The Story of WHFS 102.3 FM” is Schlossberg’s work-in-progress documentary about WHFS, where locally-legendary DJ’s—including Weasel, Cerphe, Damian, Josh, Adele and Thom—spun non-Top 40 tunes and chatted about the important issues of the day. “It was more than a local radio station,” he said. “It was the voice of a generation.”

The substance was transmitted in more than one way. “Not only were we getting messages through the music of these national and local musicians,” said the Dufief resident who is the film’s director and executive producer, “but we also were getting local news (on topics like) when an anti-war protest would be held, where to buy records, health food, the nearest surf shop. The station served as a conduit for all the thriving retail businesses that sprung up around the culture.”

Most important, Schlossberg emphasized, was that WHFS promoted and supported local music. “We heard news about the live music venues–who was playing where and when.” After rattling off the names some of the major places—The Psyche Delly, The Cellar Door, Redfox Inn, the Bayou, Lisner, the Warner, he observed, “’HFS was the center of it all.”’

Schlossberg’s allegiance to the station was cemented at age 17 when the Charles W. Woodward High School student was fortunate enough to have a summer job there. “I’d pay you to let me work here,” he remembers thinking in 1972. At Montgomery College the following year, Schlossberg was among 16 students who started the campus radio station. He served as WMCR’s program director and DJ, aspiring to be like Weasel and Cerphe, and honed his guitar skills by jamming in the student lounge when he was supposed to be in class.

The idea to tell the WHFS story came to Schlossberg some 30 years later, after seeing a group photo on Facebook of the iconic station’s DJ’s, taken at the April 20, 2013 Record Day celebration at Joe’s Record Paradise in Silver Spring. “I said out loud, ‘Oh my God, they’re all not dead yet. Someone needs to tell this story,’” he recalled. “Of course, I knew them all already, but seeing the photograph just crystallized it. A flashbulb went off.”

Despite his successful businesses and concomitant media industry contacts, Schlossberg had never done a documentary before. Thus, it was essential that he research and brainstorm the project by talking to people who had been there as well as industry professionals. About six months post-epiphany, hosted what he called a “meeting-party” with the WHFS DJ’s in the building where they once broadcasted.

Maryanne Culpepper, former president of National Geographic Television, was enlisted as executive producer, “to help with the front and back ends, to help me get the plane off the ground and into the air and with the landing,” he said. “She knows about film festivals.” Also on the team are consulting producer Jonathan Gilbert AKA Weasel, and story consultant and former Washington Post writer Richard Harrington.

Filming began in June 2014, and a Kickstarter fundraising effort in October and November 2015 raised $65,000 for the project. With two-thirds of the filming completed, Schlossberg expects the editing process to begin in September with a rough cut by the end of the year. Plans include local screenings—perhaps at AFI in Silver Spring and Landmark in Bethesda, and Netflix and Showtime and even director Morgan Spurlock have expressed interest and encouragement. He is confident and optimistic about the film’s future. “We have gotten a lot of positive feedback from the trailer,” he said. “And I think the film will have wide-ranging international appeal, too.”

Having acquired a taste for music documentaries, Schlossberg is also acting as executive producer of “The Humbler,” a film about legendary guitar player Danny Gatton.

Visit www.feastyourearsthefilm.com to see the trailer, donate to the film buy merchandise and rise other stories about the documentary.