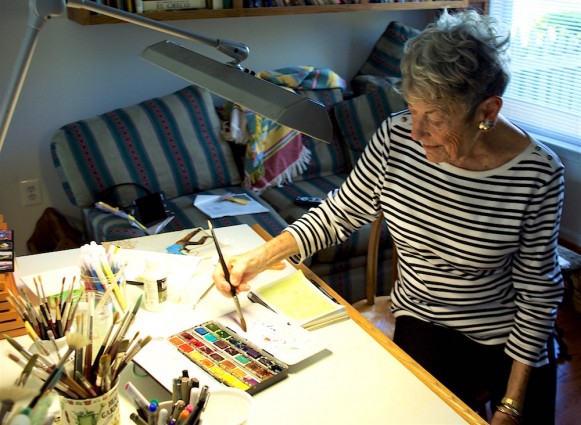 Glass is Always Full of Inspiration

Helene Glass defies the idea that time reduces creativity or productivity. And the watercolors the vital and prolific octogenarian paints are not the muted, delicate florals ageists might expect. “People and Places,” the artist’s…

Helene Glass defies the idea that time reduces creativity or productivity. And the watercolors the vital and prolific octogenarian paints are not the muted, delicate florals ageists might expect. “People and Places,” the artist’s second exhibit at Framer’s Choice Gallery on Main Street, will consist of about 35 watercolors that depict “the world as I see it—and I see it in color,” she declared.

After the frame on one of Glass’ prized pieces broke during her move from Massachusetts to Maryland, she engaged Framer’s Choice owner Steve Caldwell to repair it.  He saw her artwork, learned about her background and offered her the next available spot to show in his shop. Glass’ style caught his attention.  “You don’t see a lot of it these days,” Caldwell said, observing that her work is of “excellent quality, not too big or small, mostly traditional scenes with a contemporary flair.”

Glass and her husband of 66 years, Dr. Herbert Glass, relocated to their Kentlands condominium about 18 months ago to be closer to their family—many of their three children, eight grandchildren and four great-grandchildren reside in the area.  The couple came from an idyllic home set on eight acres in the Berkshires of Northern Massachusetts, where they lived for 35 years after Dr. Glass retired from his pediatric practice in Connecticut.

Helene Glass especially misses her gardens and the “artist’s dream come true” second-floor studio with seven windows that overlooked a pond and a waterfall, but said she has adjusted to her apartment-sized workplace. She has managed to fit most of her important furniture, artwork and art books into the reduced space, and its walls are adorned with her paintings and the intricate products of an avid needlework hobby. Her favorite paintings are “Urban Renewal,” a depiction of Manhattan’s state of eternal scaffolding—“I love what it says to me, and the design and color are very good,” and “Taj Mahal,” her rendering of merging visions of the structure at three different times of day.

Among Glass’ proudest achievements is fulfilling her aspiration to become a signature member of the elite American Watercolor Society (AWS) in 1996.  “It’s what every watercolorist wants,” she said. The nonprofit organization, founded in 1866 to promote the art of watercolor painting in America, accepts only 10 artists a year. Each candidate’s work is judged by a jury of peers; membership is awarded to artists whose work is accepted for four consecutive years.

Inspiration has come mostly from her gardens and her travels, Glass said. She and her husband, who met as students at Vanderbilt University in her native Nashville, Tenn., have been around the world twice. They spend winters in San Miguel de Allende, Mexico, where she shows at the Atenea Gallery.

“I am never without my sketchbook,” she said. She has filled 23 of these bound journals, which are “brimming with watercolor sketches, brilliant egg temperas and finely rendered oil pastels,” as well as her notes, often while on buses, trains and even a freighter. When they are on group tours, Dr. Glass said, his wife skips lunch to work on her sketches. Most of the pieces in her Framer’s show were developed from these books. “I often put a sketch away for a year or so, and then return to it,” she said.

From the time she was a 5-year-old confined to bed when she was ill–time treasured because it went along with a new box of crayons, Glass’ artistic proclivities were clear. By high school, “they let me take art instead of home economics,” but since Vanderbilt had no art department, she majored in literature. When her husband was sent to Germany after the war, Glass took fine arts classes at Heidelberg University and upon their return, earned a master’s degree in fine arts at Central Connecticut University.

Like most painters, Glass started out working in oils, but she tended to overmix the colors. “Everything I touched turned to mud,” she recalled. Her discovery of watercolors, when she was in her mid-20s, she said “was like the discovery of gold at the end of the rainbow.”

She credited Estelle Coniff, a Yale Art School graduate who ran a 10-artist critique group of 10, with having had the most profound influence on her work.  For some 20 years in Connecticut, Glass took part in the group that had the unofficial motto, “Don’t come if you don’t have anything bad to say.” From Coniff, she said, “I learned color theory, how one color affects another, and I learned about design, the dominant and the subordinate. Even now, I hear her voice over my shoulder.”

Glass said she is best known for her use of ink on rice paper and a wax resist technique, which, she said, may appear complex, but it became her routine. When asked to describe her process in a 2005 publication, “How did you paint that? 100 Ways to Paint Still Life & Florals,” she wrote, “I created the floral arrangement, simplifying the shapes to suggest flowers. On a large sheet of rice paper, I drew with a Chinese ink stick, losing some of the line as the painting progressed. Using melted wax as a resist to retain the lights, I applied a combination of lightfast inks, and watercolors, moving progressively from light to dark. I removed the wax with a warm iron, putting the paper between layers of unprinted newsprint.”

Through the years, Glass observed, “my style has become more abstract, but not completely non-representational. I still have a subject in mind, though you might not know it, because I eliminate unnecessary details.” Always up for a new challenge, Glass has been working on collages for about three years. In 2017, perhaps at Framer’s Choice, she expects to be ready to show them.