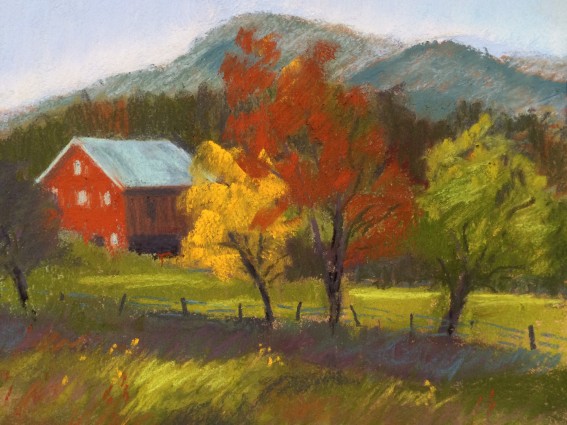 Pastels and Porcelains in Clarksburg will take part in the Countryside Artisans tour. Visitors will be able to view and purchase artists Penny McCrea's pastels — who painted "Barnesville View" — as well as the work of potter Michael Cohen Holdahl.

In the foothills of Sugarloaf Mountain, there’s beautiful countryside and farms—and plenty of art. The area, which includes Montgomery County’s Agricultural Reserve and parts of Frederick and Howard counties, is home to the Countryside…

In the foothills of Sugarloaf Mountain, there’s beautiful countryside and farms—and plenty of art.

The area, which includes Montgomery County’s Agricultural Reserve and parts of Frederick and Howard counties, is home to the Countryside Artisans, a collective of craftspeople and artists who work out of studios on their property. Three times a year, participants open their studios for tours and offer art for sale.

Dalis Davidson, who owns Dancing Leaf Farm in Barnesville and hand-dyes yarn, started the group and tour 24 years ago as primarily a sheep and wool tour known as the Barnesville Heritage Guild. At the time, she was growing and selling herbs and soaps. However, she owned a couple of sheep and eventually decided to start shearing them, spinning wool and then dyeing it. She dyes thousands of pounds of yarn a year, she said, and now gets some yarn from a wholesaler.

When she started the tour, Davidson wanted to do something to draw people to the area since there weren’t destinations like some of the wineries and restaurants that are in the community now. The tour offers the opportunity for people to come out and see the green space in the Agricultural Reserve, as well as the artists’ studios and work.

“I thought it would be nice to share what we have out here. We have a lot to offer,” Davidson said.

There are a number of artists in the area with studios on their property and the self-guided driving tour has evolved over time to include artists who work in all kinds of mediums, from oil painting to ceramic pottery to stone sculptures and more. “We all do something different,” Davidson said.

Countryside Artisans is juried, and artists must apply to be a part of the group, said David Therriault, a participant and stone sculptor who owns Alden Farms in Beallsville. Studio space—artists must have a separate entrance to their studios—and quality of art factor into the selection process.

In addition, Davidson said, none of the artists are located in developments—country is part of the charm. Participating artists “offer a nice place that people want to come and visit.”

The work is high-quality, Therriault said. Artists on this tour have shown at locations like the Smithsonian, Strathmore, the Delaplaine Arts Center, BlackRock Center for the Arts and the Corcoran Gallery of Art, among others.

This fall’s tour will feature 17 studios and 40 participating artists whose work will be featured at the various studios, Therriault said. His work will be shown during this fall’s tour; visitors will have the opportunity to walk his three-acre property, where sculptures are displayed, as well as visit his studio. “You can spend 40 minutes just walking in the yard itself,” he said.

Because there is so much to see and do along the tour, it is not possible to visit every studio in one day. For instance, Rocklands Farm and Winery in Poolesville features a working farm and offers visitors the opportunity to tour the vineyards. Art of Fire, a glass studio in Laytonsville, offers glass blowing demonstrations all day.

“I don’t think anyone could do all the studios in one day, but it makes them come back,” Davidson said.

The Countryside Artisans’ fall tour will take place 10 a.m. to 5 p.m. Oct. 7 through 9 at various locations in Montgomery and Frederick counties. Admission is free. Visit www.countrysideartisans.com for more information and a map of studio locations.