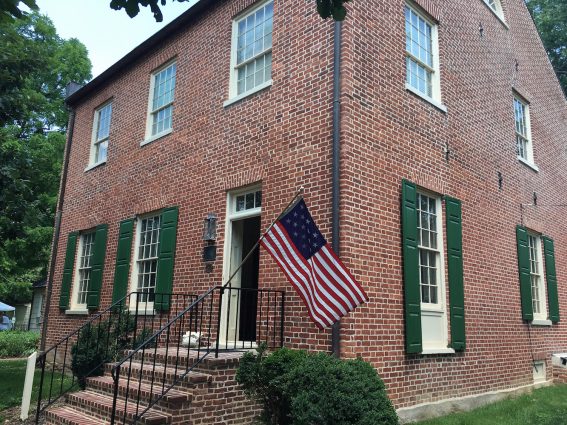 The Beall-Dawson Museum in Rockville is home to Montgomery History.

Some 200 years ago, Upton Beall, Montgomery County’s Clerk of the Court, had a large brick Federal-style home built in Rockville, then a small rural community. His daughters lived there all their lives, and…

Some 200 years ago, Upton Beall, Montgomery County’s Clerk of the Court, had a large brick Federal-style home built in Rockville, then a small rural community. His daughters lived there all their lives, and their relatives, the Dawsons, moved in later. In the 1960s, the house was donated to the City of Rockville, and it became the headquarters for the Montgomery County Historical Society.

Few changes were made to the house since that time, said Matt Logan, executive director of Montgomery History (the historical society’s new name). After visitors viewed its architectural features and 19th century-style furnishings, and learned a bit about the lives of the wealthy white Beall family and their slaves, they had no reason to return. Through the years, attendance declined, the landscaping was a mess and the signage, inadequate. “If you walked your dog past the house or drove by, it was not welcoming. In fact, it looked like it was closed,” Logan said.

Logan said that Montgomery History’s board of directors hired him two years ago “to make the space distinctive, active, relevant and prominent,” and the rebranding supports those efforts. Shortening the historical society’s name to Montgomery History in 2015 meant creating a new logo and a new website to reshape the nonprofit’s image. Similarly, despite the fact that Beall-Dawson House had been operating as a museum, its name did not reflect that until Oct. 15, when “House” legally changed to “Museum.” The goal, Logan said, was to make the group “more vibrant and inviting,” and it has worked in terms of getting “more attention, more traffic and better media coverage.”

In the spirit of any publicity is good publicity, the local media was “all over” the issue of the county’s failed efforts to relocate a Confederate statue to Beall-Dawson last year, Logan said. It “was not necessarily a pleasant episode, (but) the relevance of history became real and immediate,” he added. “It forced us to think about our assumptions about the past. The statue became a platform for public issues.”

Driving the changes are Logan and Elizabeth Lay, Beall-Dawson’s collection manager. Logan, who has master’s degrees in environment/land use planning and U.S. history from the University of Kansas, has managed metropolitan area nonprofits since 1998, including the Potomac Conservancy; the C&O Canal Trust and Potomac Riverkeeper. Lay arrived about six months after Logan, first serving as guest curator for an exhibit of wedding gowns at the Kentlands Mansion. Her credentials include a bachelor’s degree in fine art and business administration from the University of Kentucky; a master’s in the history of decorative arts from George Mason University in partnership with Smithsonian Associates, and a decade of arts management experience, including a stint as executive director of the City of Gaithersburg Council for the Arts.

In the past, two upper floor rooms of Beall-Dawson had been used occasionally to exhibit parts of Montgomery History’s collections, but Logan and Lay decided to up the ante by removing the period furnishings and mounting an exhibit on the first floor. “Cocktails, Lipstick & Jazz: Life in the Age of (F. Scott) Fitzgerald,” on view from Oct. 15 through Jan. 15, they promised, “(will) transport you to the 1920s, where you’ll discover beaded fashions from Paris, speakeasy cocktail parties, red hot jazz and weekend recreations.” In addition to flapper daywear and gowns with geometric beaded design, gold thread mesh overlay, and handkerchief and jazz hemlines, there are accessories—a red ostrich feather fan, top hat, feather boa, stockings (for rolling down to expose rouged knees!) and handbags like a tango bag (held with a ring while dancing), and even undergarments (corsets and a straightjacket), masquerade party costumes, football pants, a leather helmet and driving goggles. Period music adds to the ambiance.

Some items in the exhibit are on display for the first time. Lay noted that only four to five percent of the 2,800 textile objects in Beall-Dawson’s collection were shown in the house. And many of the objects, stored in boxes on the third floor, were infested with carpet beetles; since commercial cleaning chemicals might be damaging, Lay created a textile conservation laboratory where the insects–adult, larva and eggs–are frozen and destroyed. Lay noted that museum attendance on Thursdays, when the lab is open to the public, “is consistently 60 percent over other days.” Numerous groups have been coming through—from the Smithsonian Associates program, the Textile Museum and major area universities. Meanwhile, Lay is preparing to move some 10,000 historic artifacts plus 5,000 square feet of library records to an offsite facility that will “meet the environmental needs of the collection for temperature control, relative humidity, and security.”

On the basis of the evidence so far, the changes have been effective. “We have demonstrated there is a demand to make history easy and fun,” Logan said. As such, “We fully intend to make it a permanent exhibit space. It attracts a lot of people.” Among the future possibilities are an exhibit focusing on the 1950s, bringing back some of the old furniture periodically and pursuing a bond bill to improve the house’s accessibility.

“Cocktails, Lipstick & Jazz: Life in the Age of Fitzgerald” is at the Beall-Dawson Museum, 111 West Montgomery Ave., Rockville, through Jan. 15. Hours of operation are Thursday through Sunday, noon to 4 p.m. Admission is $5, $3 for seniors, students and active U.S. military; and free for children, 6 and younger, and Montgomery History members. Visit http://montgomeryhistory.org or call 301-762-1492. View this exhibition on CultureSpotMC here.