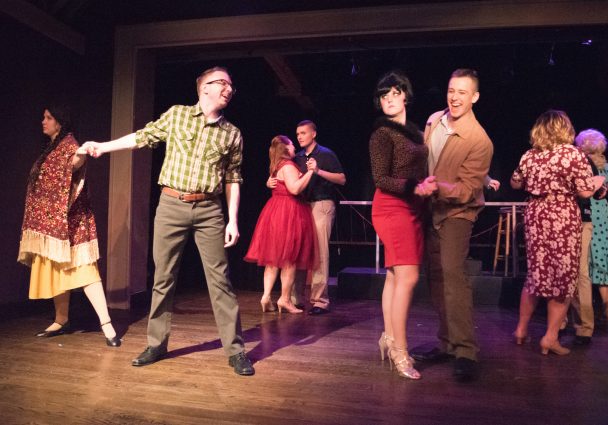 Tender is the Fight

The year is 1963. Eddie Birdlace and his two best friends, Boland and Bernstein, have just finished basic training in the U.S. Marine Corps and are set to be deployed to a small Southeast…

The year is 1963. Eddie Birdlace and his two best friends, Boland and Bernstein, have just finished basic training in the U.S. Marine Corps and are set to be deployed to a small Southeast Asian country to help stop an ongoing conflict. On the eve of their deployment, The Three Bees, as they call themselves, decide to place a bet on who can bring the ugliest girl to a party.

After Eddie meets a shy young waitress named Rose and invites her to the party, the events of the night have a profound effect on him. ‘Dogfight’ is told through his memories as he is returning to the U.S. in 1967 after fighting in the Vietnam War.

Through an Arts on the Green partnership with Rockville Musical Theatre (RMT), the musical is onstage through March 26 at the Arts Barn in Gaithersburg.

Director Dana Robinson was invited to helm the production, and Eric Jones auditioned for the role of Eddie. He had never heard of the play, but decided to listen to its score. “I was in tears about halfway through the soundtrack,” he said. “This music is so gorgeous–so many great harmonies. I knew it would be an immense challenge and I always like that. I knew right then and there I really wanted to do it.”

The character of Eddie starts off as very headstrong, yet beneath all the boasts and brags, he is a sensitive guy who fights his vulnerability. Rose “finds a way to get to him, to really pull that vulnerability out of him and show him it is OK,” Jones said. “At first, he is really scared of that vulnerability and then the vulnerability turns to guilt when he realizes what he is doing to her. He doesn’t have the discourse really to be able to talk about the emotions that he is feeling, but he is definitely feeling them.”

Eddie comes back from Vietnam with severe symptoms of the then-unknown Post Traumatic Stress Disorder (PTSD). “He doesn’t have a place in this new America that has changed between 1963 and 1967,” Jones said. “He’s definitely an interesting character to play, easily the most challenging role I have ever had to do in my life. …It is extremely rewarding to be able to play him and get inside that head and approach these things from so many different perspectives.”

Jones said he identifies as an empathetic individual who hones in on people’s feelings and tries to see how they are feeling. This character is completely different. “That has been an interesting part of (the role),” he said. “Exploring how to express emotions while playing a character who does not know how to adequately express emotions.”

This is Jones’ first role in a RMT production. “There is an insane amount of talent on that stage,” he said. “To be able to explore this material that we all have such a passion for–it is really, really great to have something like that to bond over.”

Jones’ mother is an actress, and he remembers watching her go to auditions and rehearsals and understanding her passion for acting. When he was 8, she asked if he would want to audition for the role of President Bill Clinton in Andrew Baughman’s “Fairy Tales from the Crypt.” “I had so much fun that I was trying to gobble up every other opportunity that I could after that,” he said.

Robinson said Jones comes to rehearsals fully prepared with research and scene work in his script. “He pushes his scene partners and the other actors,” she said. “He comes with so much professionalism and creativity that it just has pushed the production as a whole to another level.”

The show marks Robinson’s directorial debut. She has been with RMT since 2009, taking on acting roles like Jan in “Grease” and The Ugly Duckling in “Shrek: The Musical,” and serving as assistant director for “Footloose.” She recently joined the group’s board of directors.

Robinson wanted to direct “Dogfight” because she loves the musical’s complexity. “Directing is so different,” she said. “It is a completely different part of the brain than acting and performing. It’s more having to see the larger picture and put the pieces together. It challenges me in a different way.”

Jones and Robinson agree that audiences should expect a moving experience. “It is quite an emotional rollercoaster for sure,” Robinson said. “It is certainly not your typical song-and-dance musical. It’s a little bit more poignant and a little darker and edgier and certainly is going to jerk a few tears.”

The play portrays a different side of the war, particularly during its early stages. “I think people will really get a lot out of this show,” Jones said. “It is very cathartic. Definitely bring a box of tissues because it gets pretty intense at times, but it is a wholly satisfying evening of theater.”

Rockville Musical Theatre and Arts on the Green present “Dogfight,” a musical with book by Peter Duchan and music and lyrics by Benj Pasek and Justin Paul, at 8 p.m. Fridays and Saturdays and at 2 p.m. Sundays through March 26 at the Arts Barn, 311 Kent Square Road. This show is recommended for ages 16 and older. For tickets, $22, call 301-258-6394 or visit www.gaithersburgmd.gov. View this event on CultureSpotMC here.