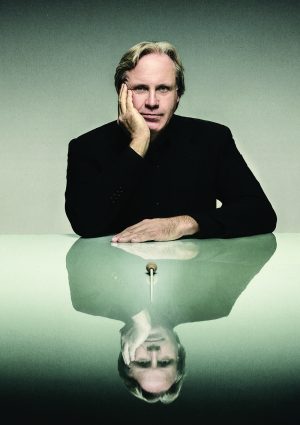 As a child, Stenz remembers being “mesmerized by my father’s piano playing. I spent a lot of my young childhood lying under the piano while he played.” Despite living in a small town that offered no professional concerts for its 20,000 inhabitants, “there was a great love for music” in his family. He describes his father as “the quintessential amateur chorus master, organist and pianist,” and his mother as “the most enthusiastic chorister you ever heard.”

His supportive parents noted their youngster’s predilection, and “were wise enough to enlist a 70-year-old dragon as my teacher” at age 5, he said. With and without her guidance, he studiously went through the repertoire. The best things his parents did for his burgeoning talents, Stenz said, “was to keep out of my way and let me explore,” noting that they had to endure hearing his “butchering” of the piano.

Stenz and his family, he said, “never ventured beyond our town to hear concerts. In fact, I attended only one concert before I studied conducting.” With live performance unavailable, “the radio was my good friend. As an adolescent, I listened to a lot of jazz—Big Band in particular. My ears were quick enough and close attention to the music was the best oral training.”

But the veritable “trigger” for Stenz’s musical future came at age 13 when he heard “The Unanswered Question,” Leonard Bernstein’s Harvard University lecture series. The six lectures focused on the history of classical music, its then-current state as well as its potential future, along with analogies to linguistics and extensive musical recordings. “I was hooked,” Stenz said. “Bernstein explained the inner mechanics and fascination of classical music–in ways far superior to any of my former heroes on German TV.” He was thrilled to meet his 70-year-old hero later at the Tanglewood Music Festival in Massachusetts’ Berkshire Hills.

Stenz continued studying piano until he was 18 when he completed the standard secondary education and had to “figure out what to do with my life. I decided to give conducting a shot and somehow made it into the conducting class (at the School of Music in Cologne).” While he acknowledges that his piano playing and sight reading were “extremely mediocre, I was still head and shoulders above everyone in my town. There was no competition.” He was also aware of his strengths. “My ear was good, and I was able to train my ears, in part by deciphering jazz’s quick harmonies, and curiosity transported me the rest of the way,” he said.

Once at university, Stenz focused exclusively on conducting, initially training as a “traditional master of chorale,” and subsequently making his debut as an opera conductor at La Fenice in Venice. Since then, he has appeared at many of the world’s major opera houses and international festivals.

Until 2014, Stenz was General Music Director of the City of Cologne and Gürzenich-Kapellmeister, but Cologne continues to be his home base. He lives there with his wife, an able fiddler who never had professional ambitions and has an “important” position in a not-for-profit cultural institution, their 17-year-old son who played double bass but is “a man of words” rather than music and 14-year-old daughter who “plays cello beautifully.” Fortunately, with his considerable travel across four continents, he observed, Cologne has three airports and he can be in Amsterdam in 2-1/2 hours.

Stenz has a pair of dates at the Music Center coming up. He will lead an Off the Cuff session including a talk and performance of Igor Stravinsky’s “Firebird” on Friday, May 5, and along with Finnish pianist Juho Pohjonen and the BSO, will perform pieces by Mendelssohn and Ravel as well as the complete Stravinsky opus on Sunday, May 7. For the first, he said, as an “ear person,” he intends to focus on “what people will hear. They will not get a lecture on background; they can look that up for themselves on the Internet. Rather, I will use that 25 minutes to give the audience a feel for the music itself and how visual it is.” Although “Firebird” was intended to be performed with ballet dancers, Stenz said the music “doesn’t require them—although I love ballet dancers. The music says it all. The audience will hear that instantly and be able to create their own movie.”

Stenz noted that typically, orchestras perform only the suites from “Firebird.” Strathmore’s performance of the complete score is, he said, “a rarity in concerts.”

On Sunday, there will be no explanations, said Stenz, but Maurice Ravel’s “Piano Concerto in G Major” and Felix Mendelssohn’s “Calm Sea and Prosperous Voyage” will be on the program along with Stravinsky. “Ravel breathed the same air as Stravinsky; the pieces have the same high octane energy,” he observed. “Mendelssohn is of a different age, but its 19th century poetry will provide a good prelude for the others.

Stenz is pleased with how he earns his living. “I’m so lucky I get to live what I love most,” he said. “I have conducted all the pieces anyone would want to conduct, and I get to see the world.” As for the future, his intentions are clear. “I want to strengthen classical music’s place in this ever-accelerating 21st-century world. I want it to be a haven for the part of humanity that does not get swamped by technology. Classical music has such a vital role to play in balancing us.”

The Baltimore Symphony Orchestra will present Principal Guest Conductor Markus Stenz will lead an Off the Cuff session including a talk about and a performance of Igor Stravinsky’s “The Firebird” at 8:15 p.m. Friday, May 5, at the Music Center at Strathmore, 5301 Tuckerman Lane, North Bethesda. Stenz, Finnish pianist Juho Pohjonen and the BSO will perform pieces by Mendelssohn and Ravel as well as the complete Stravinsky opus, at 3 p.m. Sunday, May 7, also at Strathmore. For tickets, ranging from $35 to $99, visit www.bsomusic.org. View the May 5 talk and performance on CultureSpotMC here and the May 7 performance here.