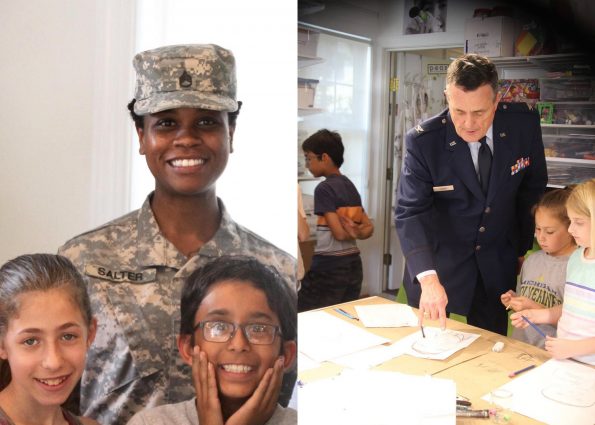 In keeping with the Fourth of July, week two of the Positive Energy Art Studio (PEAS) camp focused on all things American. Campers spoke to Staff Sergeant Chavon Lauren Salter and Air Force Colonel Regis Canny and created portraits of them.

This article appeared in The Town Courier. At the Positive Energy Art Studio (PEAS) in the Kentlands, campers are exploring how artists can connect with their communities—and in the process, they’re connecting with their inner…

This article appeared in The Town Courier.

At the Positive Energy Art Studio (PEAS) in the Kentlands, campers are exploring how artists can connect with their communities—and in the process, they’re connecting with their inner selves.

“These kids are all heart,” said Nannette Horan, PEAS founder and co-teacher with Patti Connell. Week one of camp focused on “Food & Home” and the homeless and hungry. Campers explored “how we as artists can work with our community to talk about homelessness and hunger,” Horan explained.

On June 30, the PEAS artists “went outside to the Kentlands Clubhouse and put up an installation to start a conversation on homelessness,” explained Maddie King, one of the campers.

Many stopped to talk to the artists and enjoy their creations. “One gentleman was just surprised that in this neighborhood that kids would have that feeling and understand what homeless and hungry people go through, and he was really pleased,” Horan said.

Artwork included a key mobile adorned with the inspiration “It starts here” made by PEAS camper Billy Mitchell. Social worker Lynn Rose, who spoke to campers about her work with homeless and hungry people, was so taken with his piece that she would like to display it in her office. Artists also painted welcome mats. “We were trying to convey a message that anywhere can be a home. … We never did it, but we were thinking about putting our mats all around Gaithersburg like where a homeless person would hang out … and show that everyone can be at home even if it doesn’t look like a house,” said King.

Artists created mats that represented what their own families care about, and then explored “where would homeless people put their mats, and what would their mats say, and how would we help them,” Horan said.

In keeping with the Fourth of July, week two focused on all things American, and campers spoke to Air Force Colonel Regis Canny and Staff Sergeant Chavon Lauren Salter about what it means to serve in the military and then created portraits of them. The PEAS artists also looked at military awards, commendations, medals and badges and designed the same for their family and friends.

Campers said that they learned that serving in the military is hard, that you need lots of practice to fight in a war, that “you should honor them because they’re the ones who fight for you so you can live in the world and make a difference,” and that you can be a strong, powerful woman in the military.

PEAS camps run for six weeks, and campers can attend as many sessions as they like. Mitchell attended week one and two, and brought it all together. “I learned that even if you’re in the military, you can still make a difference in your community by helping the homeless or hungry. They can donate to them, they can create new housing—and we can also do that.”