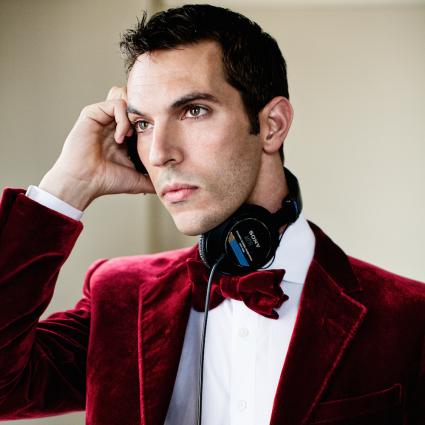 Studio Ari: Shapiro explores music from around the world in “Homeward.”

Consider Yourself at Homeward

Refugees, radicals, rogues and revolutionaries: as a journalist Ari Shapiro has covered them all. And now, with a nascent career as a cabaret performer, he’s bringing their stories to American audiences in a whole new…

Refugees, radicals, rogues and revolutionaries: as a journalist Ari Shapiro has covered them all. And now, with a nascent career as a cabaret performer, he’s bringing their stories to American audiences in a whole new way.

“I started thinking about some of the people I’ve met in my travels,” said Shapiro. “Syrian refugees crossing the Mediterranean Sea to find a better life in Europe; Ukrainian protesters marching in Maidan. I thought to myself, ‘There’s a soundtrack to these moments.’ So, I got in touch with some of these people and I said, ‘What was in your earbuds when you were on that raft? What were people singing when they were marching on the square?’ And I pulled together some of those songs and adapted them for this.”

This being “Homeward,” which Shapiro brings to AMP by Strathmore on Saturday, Aug. 5. As a host of National Public Radio’s “All Things Considered,” Shapiro’s voice is familiar to the more than 14 million listeners who tune in on a weekly basis. As a singer, his voice is an instrument known to a select few—but that may be about to change.

“It’s a different kind of satisfaction than I get from journalism,” said Shapiro. “Because in journalism you’re speaking to an audience that you can’t see. Hopefully you’re making a connection with that audience, but ultimately, it’s just you in the studio with maybe a guest, a producer, a director, an engineer.”

Performing live, he explained, “You’re creating a relationship in real time and you can feel the connection, if it’s working or if it’s not.”

Shapiro knows the feeling firsthand, having been a frequent guest performer with the Portland, Oregon band Pink Martini since 2009, when he made his debut with the pop-lounge-Latin-classical crossover group at the Hollywood Bowl. It’s a role that might surprise “All Things Considered” fans, but Shapiro sees it as a natural progression.

“I always did music, and I did theater when I was in high school and college,” he said. “But when I became a grownup, I left that behind and went into journalism.”

Not completely, as it turns out. Sure, Shapiro, 38, is a magna cum laude Yale University graduate who started his storied career at NPR in 2001 as an intern for legal affairs correspondent Nina Totenberg. Yes, he rose from regional reporter to become the first correspondent to be promoted before age 30 prior to settling into host duties at “All Things Considered” in 2015. He has been in tremendous demand as a speaker and has garnered awards like the American Bar Association’s Silver Gavel, the Daniel Schorr Journalism Prize, the American Judges Association’s American Gavel Award, and even a spot on People Magazine’s Most Beautiful People list.

His singing career is not an extension of his career in journalism, Shapiro insists, but he does see the connections. “In ‘Homeward’ specifically, I’m telling stories about experiences I’ve had as a journalist,” he observed. “So, this particular show is much more connected to my experience as a journalist than any kind of performance I’ve done before.”

Basically, it’s an hour of songs from around the world, punctuated by stories and grounded in a distinct definition of cabaret, which Shapiro said was laid out for him by a friend in London who had covered the genre for “Time Out London.”

“Cabaret needs to have a reason to exist; it needs to end somewhere different from where it began,” he said. “It needs to create a relationship with the audience, and it needs to go somewhere.”

For Shapiro, the goal in creating “Homeward” was not just to spend an hour singing songs and telling stories. He wanted “to give people something they can walk away with that will stick with them, something they’ll remember. That they’ll walk out of the room feeling different than when they came in.” And so, with musical director Gabriel Mangiante pulling together a band of local musicians to accompany him (on guitar, bass, percussion cello and piano), the journalist has managed to translate his travels into a series of musical musings on hope, perseverance and the benefits of a good soundtrack

“This cabaret is not political,” he pointed out. “This cabaret is more about human commonality, resilience, about creating connections. It certainly doesn’t touch on politics in terms of partisanship or contemporary political issues in any sense.”

It does address situations in far-flung lands, and for the sake of authenticity, Shapiro performs many of the songs in languages he doesn’t necessarily speak. How does he manage to pull that off?

“I find somebody who grew up speaking that language,” he said, “to coach me on what the words mean and how to pronounce them correctly, so I’m doing justice to it.” It is not acting, but rather trying to create a connection with the audience. It’s not an easy task, but Shapiro feels it’s worth doing right.

“In the same way a good piece of journalism can take you someplace,” he observed, “I think hearing a song in another language can be eye-opening and refreshing and sometimes challenging.”

Some of the songs may sound familiar, and all will be supplemented by Shapiro’s radio-familiar speaking voice because “as a genre, cabaret involves connective tissue between songs.” It’s not an audience participation show, he warns, but it is an intimate event, partly because good cabaret creates a connection between audience and performer and partly because AMP, with its audience capacity of 230, can’t help but offer an up-close-and-personal experience. For Shapiro, who has lived in D.C. on and off since 2001, it’s a perfect place to start the journey “Homeward.”

“Honestly, just doing this show is so new to me that doing it at all anywhere is exciting and scary and novel and new,” he said. “It’s wonderful to be able to do it in a city where I can then go home and sleep in my own bed; it’s exciting that people I know will be in the audience because it’s a place I’ve lived in for so many years.

“But just doing a cabaret is on its own such a new experience for me that I think anywhere I would do it I’d feel the same level of excitement,” he added.

And whether his voice is coming through a nightclub microphone or the radio speakers, Shapiro has one goal, really.

“At the end of the day you want to be somebody people love to listen to.”