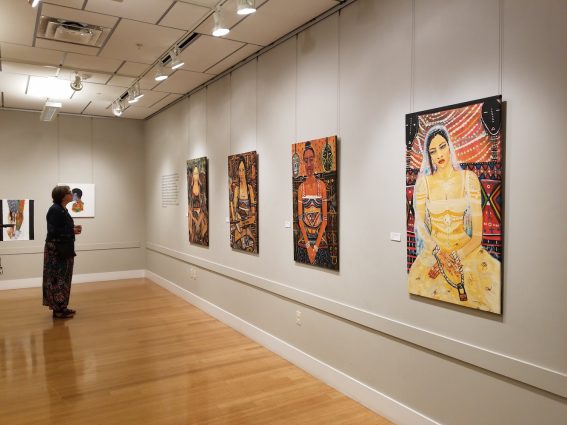 The art of Mariama McCarthy and Jessica Hopkins is on display in Silver Spring.

Hidden Figures? Not at the Kramer Gallery and Music Room in Silver Spring. Here the portraits painted by artists Jessica Hopkins and Mariama McCarthy spring from the shadows and into the light, emotion that’s powered…

Hidden Figures? Not at the Kramer Gallery and Music Room in Silver Spring. Here the portraits painted by artists Jessica Hopkins and Mariama McCarthy spring from the shadows and into the light, emotion that’s powered by color and style.

The two couldn’t be more different.

“I began making art in elementary school,” said Hopkins, 34, a D.C. native who grew up as one of nine siblings. “It sounds funny, but my older brother liked to draw, and one day I decided to challenge him.” Those family competitions evolved into a childhood immersed in the arts, with Hopkins playing the alto sax and drawing pictures until she ultimately had to choose.

“When it was time for high school and I wanted to go to Duke Ellington, I had to choose between music and art,” she explained, referring to the District’s famed Duke Ellington School for the Arts. “I chose art—and to this day, I’m glad that I did.”

McCarthy tells a drastically different tale of coming of age as an artist. “I’m from West Africa,” she said. “But I’ve lived here 25 years—I came here when I was 18.”

“In my country, we don’t have ‘painting;’ we don’t have art supplies,” said McCarthy. “I grew up in Niger, in the desert: I first saw a pencil when I was 13.”

As a teenager, she loved styling hair and doing makeup for family and friends; drawing and painting, though, happened after she had the stroke.

“One day I said to my cousin, ‘You know now I’m a painter, I’m an artist?’ and he said, ‘Well, you were always an artist! Don’t you remember? You used to draw in the sand.’”

A tale of two artists: Hopkins graduated from Duke Ellington, got an BFA in studio art from the University of the District of Columbia and an MFA in painting from Howard University, while McCarthy emigrated and taught herself to draw and paint. But both women are survivors; just as McCarthy recovered from her stroke and found her identity as an artist, Hopkins battled non-Hodgkin’s lymphoma and came through inspired.

When Amina Cooper, the manager of external affairs and public art for the Arts & Humanities Council of Montgomery County, was looking for extraordinary artists who used portraiture to reveal or conceal personal histories “particularly in depictions of marginalized and oppressed persons,” she knew who to turn to.

“Amina said she wanted to show figures, different races of people,” said Hopkins. “She saw my work and fell in love with it, and she told me she thought our work would be a great combination.”

Their work is different in many ways, Hopkins admitted, but there are thematic and symbolic similarities that tie together the two artists—strangers until now—and the figures they’ve created. “My life experiences have influenced my artwork,” she observed. “And in a way, Mariama’s life experiences have also influenced the art; the women in her pieces are conveying and depicting women who have gone through things.”

In Hopkins’ work, she is the woman going through “things,” namely the difficult treatments that ultimately cured her cancer.

“Cancer is not like catching a cold,” she said. “It’s something that completely affects you: I had to get treatment, I had to have surgeries I didn’t want, I had to do chemo, I had to do radiation.” Hopkins credits her mother— “an angel; she tells me the truth and was with me through everything”—and her late father with her recovery. And she is wide open about the ways that being sick changed her life and her art.

In her artist statement, Hopkins noted that “as a consequence of my illness, I became the subject,” and that her fundamental approach to painting started to evolve, veering more to the abstract.

“After I was diagnosed with cancer, I said, ‘Let me try something different,’” she recalled, and she began to depict the stages of her fight against cancer using new implements— pens, palate knives, scraping and roller tools—to chronicle her journey and her newfound sense of self.

“That’s when I said, ‘OK, it’s not just about, you know, drawing a pretty picture,’” said Hopkins. “What am I trying to say as an artist?”

She answers the question with complex self-portraits imbued with vibrant, meaning-infused colors. And it’s a question that McCarthy, in the very same exhibit, answers quite simply. She has never taken an art class, she pointed out. Her figurative paintings spring straight from the imagination: no photographs, no models, just ideas finding human form.

“When I make my woman-paintings, it either has to be about me, a story that I know, or a story about somebody I can relate to,” she explained. “If I have the story, I see it in my head and I just paint that. Nothing is a picture of something—it’s how I’m feeling.” Even in an exhibit called “Dis/Figure,” she noted, her work isn’t always a ‘figure,’ but rather a study in abstract patterns and colors, conjured up to catch her mood.

“I put my happiness or sadness in them,” she said. “It makes me feel better.”

McCarthy paints in oil, mostly. “I like the smoothness,” she laughed. “Acrylic reminds me of sand on my foot in Niger.”

She described an incredibly simple artistic life: painting at home, wherever she can find a little space, and letting the colors choose themselves. The result is a remarkable folk-art style that is at once simple and complex.

“I see something that happens to a woman, any woman, it doesn’t matter,” she said. “I just want to paint that feeling she must have, so I go there in my mind: just how she stands, or how she feels. But the rest? I don’t know. Sometimes I don’t remember how I make it—it’s a feeling, it’s a story.”