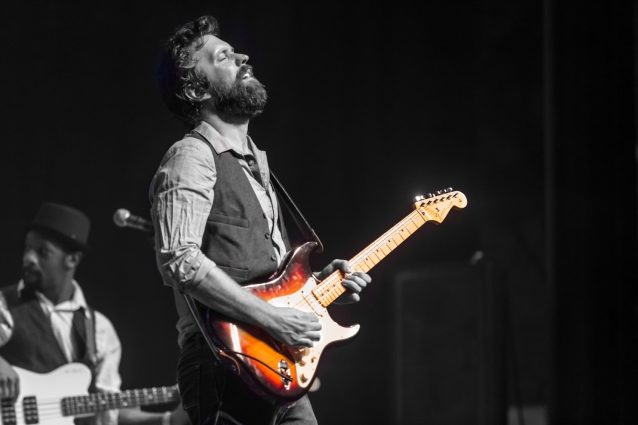 Shaun Hague comes to AMP by Strathmore to pay tribute to Eric Clapton.

This story features “Journeyman: A Tribute to Eric Clapton” at AMP by Strathmore. Learn more about this performance and get tix on the event page. Many who grew up in the late 1980s and early…

This story features “Journeyman: A Tribute to Eric Clapton” at AMP by Strathmore. Learn more about this performance and get tix on the event page.

Many who grew up in the late 1980s and early 1990s were swept up in the Seattle grunge movement; they listened to Pearl Jam, Nirvana and Soundgarden. But musician Shaun Hague stuck to classic rock.

He first heard a song by English rock and blues guitarist, singer and songwriter Eric Clapton on his father’s “Best of Cream” album, a compilation of the power rock trio’s noteworthy hits before they disbanded in the late 1960s.

The sound of Clapton’s electric guitar plugged into a Leslie speaker during the song “Badge” had a profound effect on Hague. “I remember hearing that sound and hearing him hit that solo and I was just like ‘What is that? I have to replicate that,’ and that was it,” he said. “I was hooked.”

Until he asked for and received a real guitar for Christmas, Hague would often retreat to his bedroom to play air guitar. “I used to learn the words to every song when I was a little kid and (once) I picked up the guitar, I couldn’t put it down,” he said.

“One day I was like, ‘I’m tired of just listening to this. I actually want to learn how to play what Eric is doing, what the Beatles are doing, what Led Zeppelin is doing’,” he said. “From then on, you couldn’t pull (the guitar) out of my hands.”

The self-described quiet, shy kid felt transformed by his guitar and the stage. “I knew at a young age,” he said. I don’t know what else I would do if I wasn’t doing something in music. There was no other option for me professionally. I wasn’t going to let anything stop me.”

Since dedicating his professional career to music, Hague has toured with artists like Kenny Wayne Shepard, Amos Lee and John Waite. For many years, he was in other artists’ side bands, but eventually got to the point where he didn’t want that role anymore. He still wanted to tour, but with two young daughters at home, he didn’t want to be on someone else’s schedule.

“How can I do this and still tour and still do something that means something to me,” he wondered. “So, I decided to do a tribute to Eric (Clapton),” he said. “There are not many out there. We are the only national touring one at the moment. We are filling a void, especially since Eric doesn’t tour anymore.”

Hague will present his show, “Journeyman: A Tribute to Eric Clapton” at AMP by Strathmore in North Bethesda on the evening of Sunday, April 22. Whitesnake’s Michael Devin, who befriended Hague when they performed with Shepard, also will be part of the tribute band this month.

The 90-plus-minute show features favorites from Clapton’s career as a member of multiple stellar bands–the Yardbirds, Blind Faith, Derek and the Dominos, and Delaney and Bonnie and Friends–as well as his solo work. On the program are songs like “Layla,” “Wonderful Tonight,” “Cocaine” and “Tears in Heaven” as well as a mini-tribute of six Cream songs celebrating the 50th anniversary of the group’s final concert. Some — like “The Core,” “Tell the Truth,” “Lay Down Sally,” “She’s Waiting” and “No Alibi” – are songs Clapton has not performed within the past few decades.

“Really, we span everything (in Clapton’s career), because there is always someone at the end of the show that walks up and says, ‘You didn’t play something from this record’ or ‘this year.’ We try to touch something from every decade,” Hague said.

Performing the tribute show since 2016, Hague changes the set list every year to showcase his favorite songs along with his audience’s repeated requests. The band currently has a repertoire of about 35 Clapton songs.

“We definitely put our own spin on certain things just to change it up, but otherwise, we stay pretty faithful,” Hauge said. “For me, it is not hard at all. I know his stuff like the back of my hand. I put out a solo record in the past and I actually feel more comfortable playing (Clapton’s) music than I do my own original stuff because you walk out and everyone knows the songs already. They are waiting to hear them. They know all the words, so the crowd is already with you, which makes life really easy on stage.”

Hague’s first concert experience—when he was a high school freshman—was Clapton’s Pilgrim Tour. That show was 20 years ago this month. Hague has seen him in concert at least 10 additional times.

Listening to Clapton for nearly all his 34 years, Hague said the musician’s phenomenal abilities on the guitar and his voice continue to inspire him. He wants audience members to have a great time reliving their memories with ‘Slowhand.’ “We really hope they are happy with the renditions and the tribute we are doing, and that they will come back again,” he said.