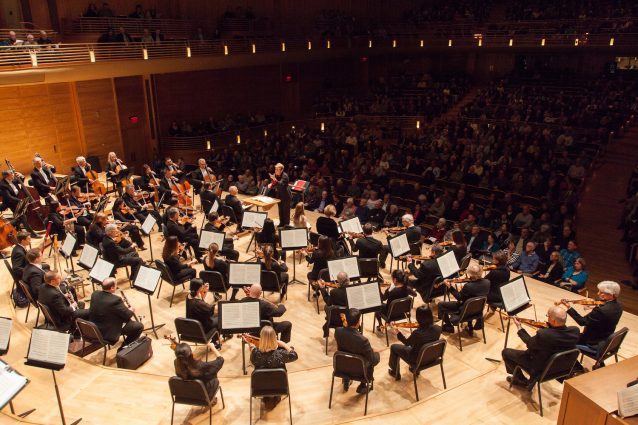 A look down at the Baltimore Symphony Orchestra performing on the stage of The Music Center at Strathmore.

"There is no 'serious' music or ‘unserious’ music, just good music and bad music." The quotation is sometimes attributed to Leonard Bernstein -- whose birth centennial we celebrate this year -- and sometimes to Louis…

The quotation is sometimes attributed to Leonard Bernstein — whose birth centennial we celebrate this year — and sometimes to Louis Armstrong. Either would be believable, considering the genre blending that is characteristic of both musicians.

Regardless of who made the statement, Kirill Gerstein learned at an early age that there is “good music” in many genres. Although he studied classical music since he was a child — his mother is a musician, so “there was always music in the house,” the Russian-born pianist said — he also listened to his parents’ extensive jazz record collection.

Gerstein loved what he heard. “I like the harmonies [of jazz], and luckily I was encouraged by my parents, and also by my teachers, to pursue that interest in improvised music and in jazz and not just in classical,” he said. “I grew up playing both and being interested in a variety of styles.”

Gerstein will demonstrate his affinity for both jazz and classical music when he plays the solo of George Gershwin’s Concerto in F for three performances with the Baltimore Symphony Orchestra (BSO) — on Thursday, May 31, in the Concert Hall of The Music Center at Strathmore in North Bethesda — and then on Friday and Saturday, June 1 and 2, at the Joseph Meyerhoff Symphony Hall in Baltimore.

Gerstein, who emigrated to the United States and now lives here and in Germany, is an aficionado and frequent performer of Gershwin. He explained his love for the American composer this way: “Because I studied both classical and jazz, I think that Gershwin is something that is quite at home, in the sense that Gershwin also played within those stylistic boundaries, or rather, erased the stylistic boundaries. For me, it feels clear which strands are coming through: which come from his classical background and which come from his jazz background. It’s something that resonates with my own mixed background.”

Gerstein recorded Gershwin’s “Rhapsody in Blue” as it was first written. “I think the piece really suits the original orchestration more,” he said. “I think it sounds jazzier; it sounds more like Klezmer music, which is certainly one of the sources of inspiration. It’s tighter, it’s jazzier, it’s more transparent, so I think it fits the content of the piece more.”

Programming concerts is an art in and of itself. Although he began working with the BSO in January, after the season’s schedule was already selected, Abhijit (Ab) Sengupta, Director of Artistic Planning, noticed an interesting connection between the works the orchestra is presenting this spring. “The programming thread is relating music to dance,” he said.

The previous concert included excerpts of “Swan Lake” by Tchaikovsky, perhaps the greatest creator of ballet music, as well as his “Serenade in Strings,” which New York City Ballet founder George Balanchine choreographed.

The current concert will feature a well-known dance piece, “The Suite” from Stravinsky’s “The Firebird” as well as Schumann’s Second Symphony, which he composed after not having written music for a year.

Besides tying into the dance theme, “The Firebird” connects to “Concerto in F” in another way. “Stravinsky lived in Paris for so long. He was influenced by French composers, and they by him,” said Sengupta. “Gershwin went to Paris as well, to study piano with Nadia Boulanger, and wrote his ‘An American in Paris’ there.”

The Schumann symphony contains a scherzo for the violin section, which is perhaps “the most frequently work by the composer and is frequently a requirement at violin auditions,” said Sengupta, a professional violist turned arts administrator.

He has high praise for Kirill Gerstein, whom he calls “one of the great classical virtuosi of our time — but who also got hit by the jazz bug.”

Gerstein has won many accolades for his playing. In 2010, he became the sixth recipient of the prestigious Gilmore Artist Award, presented every four years to an exceptional pianist who, regardless of age or nationality, possesses broad and profound musicianship and charisma and who desires and can sustain a career as a major international concert artist.

According to the pianist’s website, he has shared his prize through the commissioning of boundary-crossing works by Timo Andres, Chick Corea, Alexander Goehr, Oliver Knussen and Brad Mehldau, with additional commissions scheduled for future seasons.

Gerstein won First Prize at the 2001 Arthur Rubinstein International Piano Master Competition in Tel Aviv and received an Avery Fisher Grant in 2010. Expressing his gratitude for the Gilmore Prize, Gerstein said, “It’s a very significant award in our field: you cannot apply, and the selection process is without you being aware of it taking place. It’s a very carefully thought-out and excellent process, so I’m very honored that I received that.”

Winning the Rubinstein piano competition was “also very meaningful and opened a lot of doors for me. But I’m grateful and honored for whichever prizes and awards I’ve received,” he added.

Which composer’s work does Gerstein most like to play? There isn’t one, as such. At least, not only one. “It’s my job as a performer or as an interpreter to shift my tastes and to be in love with whatever I’m playing that day or that week because it would be unfair to the audience if I came to play my second or third-favorite thing other than my favorite thing,” Gerstein said. “I think the joy is in the variety, and as pianists we have an incredible library of repertoire to choose from – it’s practically endless. So that’s one of the things that makes the journey and the lifetime of being a pianist so fulfilling.”

So, for now, Gershwin, whom he does love, is Gerstein’s favorite composer, an enthusiasm that resonates with many concert-goers. “Gershwin’s impact on audiences speaks for itself,” he observed. “The tremendous energy and admiration and adoration that he deservedly gets. But finally, I think the impact of music generally is inexplicable, which is why we have concerts; if I could explain it, I wouldn’t need to play it.”

The Baltimore Symphony Orchestra will present the Gershwin Piano Concerto concert at 8 p.m. Thursday, May 31, at The Music Center at Strathmore, 5301 Tuckerman Lane, North Bethesda. Tickets range from $35 to $99. For tickets and information, visit www.bsomusic.org.