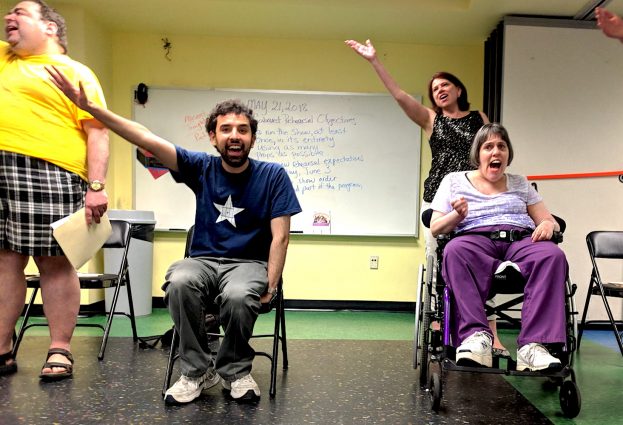 She has been performing since she was a little girl, but occasionally Ana Bradley gets stage fright. “Sometimes I get nervous,” admitted the 29-year-old triple threat, a singer-dancer-actress who will perform in ArtStream’s Spring Cabaret.…

She has been performing since she was a little girl, but occasionally Ana Bradley gets stage fright.

“Sometimes I get nervous,” admitted the 29-year-old triple threat, a singer-dancer-actress who will perform in ArtStream’s Spring Cabaret. “But I just breathe: in through my nose and out my mouth — and everything’s gonna be okay.”

Bradley, who has Down syndrome, will be performing in a musical revue on Monday, June 4 at AMP Powered by Strathmore in North Bethesda. A member of ArtStream’s Cabaret Company, she will be joined by a 12-member cast that features actors with intellectual and developmental disabilities assisted by volunteer mentors and theater professionals. Working together, they’ll create an evening of original performances featuring songs, dances and dramatic performances.

It’s the second such cabaret for Bradley, who balances her passion for performing with her job as a library aide at the Smithsonian Libraries. A stickler for detail, she has challenged herself to learn the lines, marks and choreography required to put on a musical that features “nine songs and a scene from Shakespeare — ‘Pyramus and Thisbe.’

“’It’s hard,” she admitted. But the show, called “Happy Again: Songs, Dreams, and Rainbows” includes some of Bradley’s favorite songs, many with collaborative interpretive dance moves.

“I’m dancing to ‘Somewhere Over the Rainbow,’” she said happily. “There’s a choreographer; she is Annetta Dexter Sawyer.”

And a musical director, Abby Madden, and a director, too: Pamela Leighton-Bilik, who Bradley knew long before she became an ArtStream star. “Mrs. Leighton-Bilik was my drama teacher at Hoover Middle School,” Bradley explained. “Her dream is to work with kids with special needs.”

That has been one of her dreams, but Leighton-Bilik’s reality includes working with a variety of actors from theater-loving students to professional adults. The retired teacher comes from theatrical family; she said she moved from performing to directing “because I became fascinated with it,” and even has her own theater company, which puts on Gilbert & Sullivan shows in Derbyshire in the North of England every summer. Stateside, she has a few irons in the creative fire, working with a handful companies including ArtStream.

“One passion leads to another,” she said. “I became intrigued and excited by the prospect of using theater to bring out the best in people on the autism spectrum.” At Hoover, the last school she taught at before retiring, Leighton-Bilik did a fall and a spring production — and realized that many of her students on the autism spectrum were able to achieve success performing the works of Gilbert & Sullivan.

“There was nothing like it,” she remembered. “It forced me to be even more creative, and led me to taking the classes for special ed.”

Which eventually led her to ArtStream. This is her first year with the organization, which offers a variety of programs for different communities — from children in hospitals to wounded service members, their families and caregivers. ArtStream maintains a handful of theater companies in Maryland and Virginia, and offers classes, workshops, summer camps—and the opportunity for performers like Ana Bradley to get onstage and follow their dreams.

“We went to see ‘The Nutcracker’ when she was 4,” said Ginny Colten-Bradley, Ana’s mom. “We sat in the first row, and when all the kids came out in the scene with Mother Ginger, Ana said: ‘I want that!’”

Bradley trained at Bethesda Academy of Performing Arts (BAPA, now Imagination Stage) and Metropolitan Ballet Theatre (MBT), as well as in St. Louis, where the family lived briefly and where Colten-Bradley, a scientist, worked to establish a BAPA-like academy in St. Louis.

“ArtStream was actually starting in 2005, around the same time we rolled out Access the Arts in St. Louis,” said Colten-Bradley. When the family moved back to Montgomery County, “we knew about ArtStream — we were looking for it!

“She’s been dancing and singing since she was so young; it’s just part of who she is,” Colten-Bradley said. “Ana has got a real drive to do this, and she has opened doors for other kids.”

And those others have proven themselves, according to their director. “What these actors have accomplished, I’m not going to say, ‘It’s miraculous,’ but it’s impressive,” Leighton-Bilik said, citing the ambitious program and tight rehearsal schedule. “It’s very impressive. They really rose to the occasion.”

Despite the extensive preparation, the show is relatively short— “about 45 minutes,” according to the director. Doors open at 6:30 p.m., free “nibbles” will be served and a cash bar is available before the main event at 7:30.

And even when “Happy Again: Songs, Dreams, and Rainbows” ends, Leighton-Bilik expects that its impact will continue. As a director, she works on more than just the show itself, seeking to instill a sense of the importance of meeting deadlines, to encourage teamwork and to “teach people not to second-guess themselves. Just ‘do’ — just go ahead and do it.”

It’s a lesson her former student embodies. Leighton-Bilik and Bradley lost track of each other after eighth grade ended, but their mutual love of theater brought them back together.

“When I agreed to take the Spring Cabaret gig I went to observe a Winter Cabaret rehearsal with another director,” the director explained. That show, too, featured Bradley — her self-directed dance to Coldplay’s “When I Ruled the World” was a standout — and she recognized her former teacher at once.

“After all these years, almost everybody looks familiar,” Leighton-Bilik laughed. “But there was this one performer there who looked vaguely familiar.” When someone called Bradley by her distinctly-pronounced first name, “Ahh-na,” it all clicked, and teacher and student were reunited.

“She just threw her arms around me, and it meant the world to me,” she said. “Especially to see Ana again, still enjoying the music, the dance, the acting, and to see how she’s blossomed.