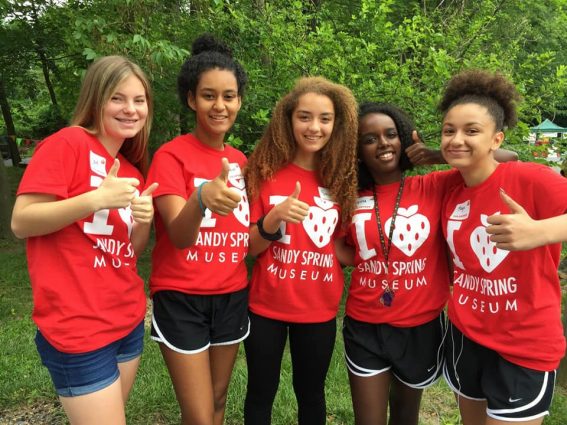 Volunteers, like these, play a major role in planning and executing the Strawberry Festival.

Allison Bawek is hoping for two reasons that it won't rain on the Strawberry Festival, slated for Saturday and Sunday, June 2 and 3, at and around the Sandy Spring Museum. One reason is the…

Allison Bawek is hoping for two reasons that it won’t rain on the Strawberry Festival, slated for Saturday and Sunday, June 2 and 3, at and around the Sandy Spring Museum.

One reason is the same as everyone else’s — hoping for clear pleasant weather, without rain or excessive heat. And, should it rain, her dancers will not be able to appear on the Community Stage because the floor would be too slippery.

Bawek owns and directs Ballet Arts Studio in Sandy Spring; she and her husband, Bradley, also sponsor the Community Stage, one of festival’s three performance stages. “We’ve been performing at the Strawberry Festival for the past 15 years,” said Bawek, who has headed the studio since 2003. “It’s such a great community event.”

The festival serves as a showcase for a few of the pieces Ballet Arts will present at its June 9 end-of-year recital. “We’re lucky to have such a rich dance community in Olney,” Bawek said.

Dancers aside, the Strawberry Festival, now in its 37th year, proceeds rain or shine — barring a thunderstorm, which has not happened yet.

But the big news this year is not weather forecasts; rather it is that the major community event, which has taken place on one day since its inception has now expanded to two, said Susan Keeley, the museum’s marketing director.

“A lot of the impetus for the move [to expand the festival] came from the attendance last year,” she explained. “We had 7,000 people on one day, and we got a lot of feedback that if we held it on Sunday as well as Saturday, we’d have a great response.” The museum is expecting to hit the 10,000-attendee mark this year.

The festival itself also has grown, this year featuring more than 50 arts and crafts vendors. It therefore takes place both inside and outside the museum, “with every corner of our property in use and parking available across the street,” Keeley said.

The Strawberry Festival began in June 1982 on the old Montgomery Hospital grounds in Olney.  Cindy Chirtea created and chaired it as a fundraiser for the museum.

In fact, for many years, the festival was the museum’s only fundraiser and was supported by local businesses. It remains, said Keeley, a key part of the museum’s fundraising.

The festival in its beginnings was completely staffed by volunteers and featured many of the same activities as it does today. Despite the exponential growth in attendance and the number of participants, the festival retains much of its small-town flavor, Keeley said, and volunteers still play a major role in its planning and execution.

More than 200 volunteers [typically] help at the event, many of them high-school students who earn Student Service Learning (SSL) hours, she added. “There are several volunteers, like Robb Newman, who have volunteered for every festival since the beginning.”

Genna Christopher, co-owner of the Christopher’s Hardware across the street from the museum, has been volunteering since 2002, and served as a past chair of the festival. “It’s a really great event,” she said. “It has morphed so much, from a little community picnic to a full-fledged community event, with headline entertainment, games and activities.

“There are activities for children of all ages,” she added. “Over the years, the Strawberry Festival has featured a rock-climbing wall, pony rides and a petting zoo, among others.”

Specifically, Christopher and her husband, Tom, have sponsored the festival’s Beer & Wine Garden — located near the bandstand — for the past four years.  Historically, the museum wasn’t allowed to serve alcohol on its premises, but as it moved from a static museum to one with growing programming and events onsite, such as weddings, “it became important to have alcohol for guests,” Christopher said.

Aside from serving drinks, speakers at the Beer & Wine Garden will educate festival guests about brewing. Ed Jarobe, a local brewer, for example, has stayed close to the festival theme with the strawberry wine he will sell by bottle and glass.

But festival organizers will “keep tight control” over the drinking. “We don’t want this to be a drinking festival,” Christopher said. “Kids can come into the Garden, but they’re carded, and the area is roped off.”

The Beer & Wine Garden is not the Christophers’ only contribution. They sponsor the Pick-a-Prize raffle, which costs $5 a ticket. Purchasers can enter to win their choice of three prizes: Escape to the [Ski] Slopes at the White Tail Resort in Mercersburg, Pa.; Dine Around Town with a selection of gift cards from local restaurants and Grill it UP; a gas grill.

Another active volunteer is Lucia Costantino, branch manager for the Sandy Spring Bank in Colesville. Other bank employees will donate their time as well. Their contribution is a booth that serves strawberry shortcake — the festival’s signature food — as well as brownies, chocolate-dipped strawberries and ice cream, among other desserts. “I’ve been running our booth for the past few years and am co-chair of the event,” said Costantino. “It’s just incredible.”

The museum supplies the food, and volunteers do their best to satisfy the appetites of all the interested festival attendees. “We can’t anticipate exactly how many people will come, but we do order extra shortcake,” Costantino said. “There are always long lines for our booth, even though the festival has food trucks as well.”

Volunteering at the festival is hard work, but also satisfying, Costantino said. “The museum is a great partner, and we’re happy to be part of their success.”

The feeling is mutual, said Keeley, since the Strawberry Festival could not survive and thrive without the support of local businesses and residents. “The festival has always been a community-based event,” she said. “I think it’s the largest such event in the area There’s nothing that compares with it.”

Now if only the weather will cooperate …

Tickets — $3 per person, $10 per family (of four to six) — are available at www.sandyspringmuseum.org. Babies, under age 1, are admitted free. For information, e-mail info@sandyspringmuseum.com or call (Thursday through Sunday) 301-774-0022.