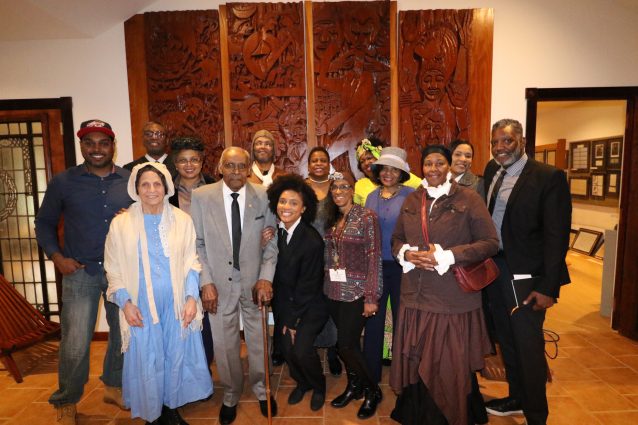 As our nation celebrates Black History Month, the Sandy Spring Slave Museum will offer an opportunity to “meet” some of the most courageous Americans who have fought for civil rights. Fourteen actors will take on…

As our nation celebrates Black History Month, the Sandy Spring Slave Museum will offer an opportunity to “meet” some of the most courageous Americans who have fought for civil rights. Fourteen actors will take on characters who will “come to life” and talk about their inspiration during the second iteration of “The Living Museum” during three approximately 90-minute shows on Saturday and Sunday, Feb. 23 and 24.

The idea for the original program came out of the museum’s “mission to bridge the communication gap and enhance cross-cultural communication,” explained Joy Turner, who directs the museum and the production. During museum tours, she and other staff members became “aware that many young people did not know who many of the people were who helped shape our country.”

So, Turner, said, “The thought was that we could engage and educate them with an interactive experience that included auditory, visual and kinesthetic learning styles by offering a Living Museum rather than just talking to them. We wanted the museum to come to life for them.”

Last year’s production, said Turner, “was about overall Black History and followed specifically the museum exhibits, taking students on a journey from slavery, the building of America, our local Montgomery County heritage to achievement.” Yet most of those personalities – among them Harriet Tubman, Rosa Parks and Thurgood Marshall — were already “familiar to students from their school studies.”

The debut event was a resounding success – “1,200 people showed up in one day and we had to give out timed tickets,” so there was no question about doing it again in 2019. But, Turner said, “we wanted to give a little more knowledge of these individuals. We added greater in-depth characters and enhanced the production, sets and costuming.”

A new partnership with Adventure Theatre-MTC’s artistic director, the “inspirational” Michael J. Bobbitt, said Turner, also helped inform this year’s production. Working with the Glen Echo-based company on its “Huckleberry Finn’s Big River” show, she added, “allowed us to better visualize and grow this production. It gave us a better understanding of how to articulate the information to our audience in a way that was engaging, educational and thoughtful.”

In addition, while last year’s cast consisted mostly of members of the museum’s board and the local community, Bobbitt reached out to professional actors to join Turner’s cast. He was pleased to support “Adventure Theatre’s new best friend,” he said, because “Living History inherently functions as live theater, and people learn more when they can experience things in the flesh. It’s visceral.”

The choice to emphasize the Civil Rights Era this year is “reflective of all the things that are in our daily news,” Turner explained. “We wanted to add to the general knowledge and not simply focus on the civil rights icons that have come to represent the equal rights movement. So, this year, we are highlighting Sojourner Truth, Josiah Henson, Nelson Mandela, Andrew Goodman, Angela Davis, Gloria Steinem, Colin Kaepernick, Fannie Jackson Coppin and Ruth Bader Ginsburg.”

Guests will gather in the building’s meeting space, which was “designed to look like a sanctuary with church pews for seating,” Turner said. It was created that way “because the church was and is the heart of the black community. In the walls of many churches throughout the land, African Americans found sanctuary from harsh realities and were able to plan strategies to seek equality.”

Turner, in the guise of The Journey Griot, will start the proceedings, followed by Sojourner Truth and Josiah Henson “making their way through the sanctuary to freedom,” she said. In front of a backdrop of video slides and synchronized recorded protest songs, Farquhar Middle School student Ro’Nya Smith will read Dudley Randall’s 1965 poem “The Ballad of Birmingham” and protestors will hold signs representing various time periods.

Thus equipped with “some background on the larger struggle for equal rights and its history, and the people they will meet” said Turner, each group of 20 to 25 people will follow their guide through the five exhibit galleries that constitute the Living Museum.

As for the actors, both students and professionals, Turner said, “We gave them their scripts and told them to change (their lines) any way they like, to give their characters their own voice and feelings.” At least two of them feel well matched to their characters.

Trevor Whitaker, an Our Lady of Good Counsel High School 15-year-old, admitted to some initial doubts about participating; he had not acted before. “But then I thought about who Colin Kaepernick is and how we share some of the same ideas, and how I have lots of knowledge about him — considering I am a big NFL Fan and also play football,” he said.

Samuel Intrater, a 19-year-old from Silver Spring who is studying theater and government/politics at the University of Maryland, will portray Andrew Goodman. “I was drawn to the character because he was a college student who was murdered at the young age of 20 for his political activism,” he said. “I think it’s probably a lot more powerful if these lines are said by someone who actually is almost Andrew’s age, so the audience can truly understand the brutal heartlessness that the Civil Rights Movement was up against, and still is to this day.”

“What I especially appreciate about the program is that it does not consider the Civil Rights Movement a campaign of the past, but rather an ongoing struggle throughout every decade of our history,” he added. “Today, when black Americans are statistically far more likely to be stopped, arrested, and even killed by the police than white people, it’s important to put things in perspective, which the Sandy Spring Slave Museum does beautifully.”