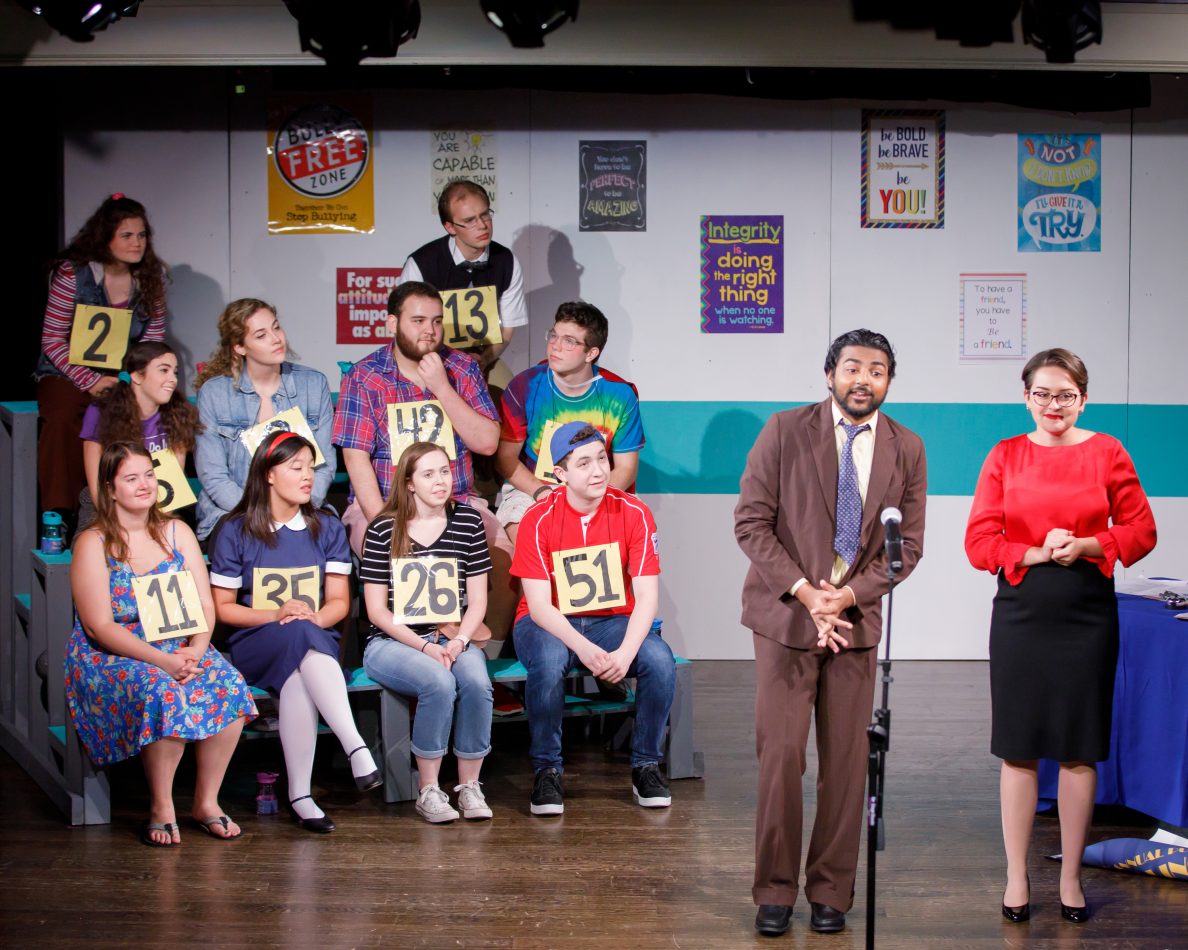 Yashi Janamanchi and Mary Murdock act as the adults in the room in front of the ensemble of spelling bee contestants.

Mary Murdock never had a chance to participate in a spelling bee while going to school in the Sykesville area. “I always loved spelling tests in school,” she said. “If I had had the opportunity,…

Mary Murdock never had a chance to participate in a spelling bee while going to school in the Sykesville area. “I always loved spelling tests in school,” she said. “If I had had the opportunity, I definitely think that is something I would have enjoyed doing.”

The University of Maryland English major and music minor said she cares about grammar and likes to think she is a good speller.

This mindset helped her take on the role of Rona Lisa Peretti, the moderator in Wildwood Summer Theatre’s production of “The 25th Annual Putnam County Spelling Bee.” The youth-run group is presenting the coming-of-age musical comedy through Aug. 3 on the stage of the Arts Barn in Gaithersburg.

“It’s a really fun show,” said Abbie Olshin, the show’s director. “It is a small cast, which works really well for the space. The Arts Barn is a beautiful facility. The set never changes.”

The show focuses on six middle school students competing in a spelling bee for a chance to move on to the national competition. “It is a great show, showcasing how being a quirky or different character isn’t a bad thing,” Olshin said. “Being eccentric is fun.”

Murdock’s character, Rona, won the bee 22 years ago by spelling “syzygy” correctly; she comes back each year to act as moderator and relive that triumphant moment.

Young adults are playing the parts of all the students, but Murdock was drawn to the more mature Rona. At age 20, she said she tends to be cast in older roles, and her friends often say she is like their mom.

“I like to take care of people, to cheer people on,” Murdock said. “It feels very natural to me to look at all these people who are my peers, but are playing these kids (and be) proud of them and excited for them and excited to see what they are going to do. I just get really excited about watching people I care about do cool things.”

The production also gives willing audience members a chance to participate in the spelling bee. “We are going to have a signup list, so if you would like to be an audience volunteer, you can put your name down,” Olshin said. While actors will be spelling the words in the script, the volunteers will get some words that are suggested, but also some that are not. “We are going to try to have some fun with finding other words as well.”

Murdock will be the cast member to interact with the audience participants and give them their words. “I am excited to see how that goes because I don’t get to do a lot of improv in most of the shows I have done,” she said. “It is really an improv-heavy (part) because you don’t really know what audience volunteers are going to do.

“It is also hard to rehearse because we can’t really create the spontaneity of an audience volunteer. We are going to have some people come in for rehearsals and help us out with that, but it is really hard to know what is going to happen until there are actual audience volunteers. I have a formula of what exactly I am going to say to people and a couple of ideas in my back pocket.”

One way Murdock has prepared for her role is by watching YouTube clips of spelling bees to better understand how they work in real life and the different techniques people use.

“It is a unique show — just how everybody gets their moment on stage,” she said. “Everybody gets a moment to tell their story and give their background (to say) ‘This is why I am here’ and ‘This is what I want.’ There really isn’t a lead character, but it works because the ensemble is working so well together and everyone in it is so talented.”