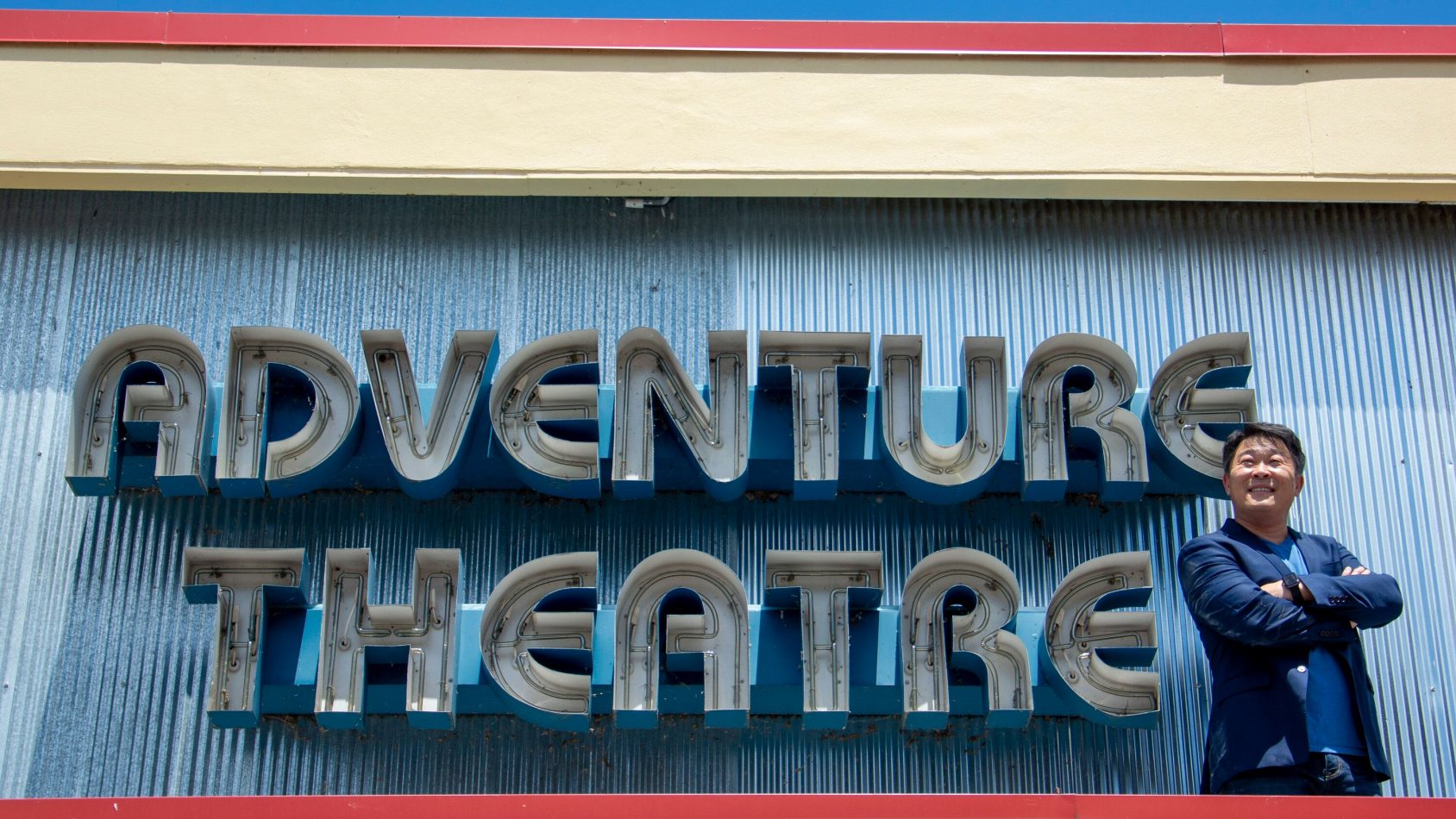 Who says you can’t go home again? Not Chil Kong. “Oh, they say that, but it’s not actually true,” said Kong, who’s staying with his parents at their Northern Virginia home as he takes the…

Who says you can’t go home again? Not Chil Kong.

“Oh, they say that, but it’s not actually true,” said Kong, who’s staying with his parents at their Northern Virginia home as he takes the reins from outgoing Adventure Theatre MTC (ATMTC) Artistic Director Michael J. Bobbitt. “You can, you know?”

Kong grew up in Woodbridge, Virginia, back when it was relatively rural; he sang in the chorus, inspired and mentored by the choral director, but didn’t get bitten by the theatre bug until college.

“I’m a Hokie, so it was at Virginia Tech,” he recalled. “I saw the national touring company of ‘Les Misérables’ in Roanoke — I was in show choir at the time — and said, ‘Oh, my, this is what we are talking about!’”

He felt transformed, “suddenly able to understand something in a universal way. “To me, it was magic,” he added. “It inspired me to find that liberating spirit within myself.”

That stayed with Kong. With an undergraduate degree in psychology and marketing from Virginia Tech, he had planned to go into advertising. But suddenly, the theater beckoned — and he would use his training in motivating people by telling stories in a different way. “I didn’t even think about it until I was in the Boston Conservatory,” he laughed. “All the things I had done in college led directly to putting on a play. It was a fairly easy transfer from advertising to the arts.”

Less easy, perhaps, was Kong’s sense of himself. The Korean-American director noted that growing up as an immigrant made him feel like an outsider, especially before representation became a priority at a company like the one he now runs. Indeed, ATMTC’s mission to celebrate and cultivate equity, diversity and inclusivity gets a boost from Kong, the only Asian American artistic director in the DMV and the only Asian American in a leadership role in any major Theatre for Young Audiences (TYA) organization in the U.S. right now.

“They call us one-point-fivers,” he said. “We tend to live between the world of the first generation and the second generation.”

Technically, Kong is an immigrant, born in South Korea and brought to the United States as a very young age; his first language was Korean, but English quickly became “dominant.” “I can speak Korean, kind of hold my own,” he said, “but I’m much more fluent in English.”

Married with a 7-year-old son, Kong said his parents, though supportive, didn’t always see eye to eye with him on his career choice. “At the end of the day, all they wanted for me was to be successful and happy,” he said. “The only issue was ‘How?’”

And at the time, perhaps, they had a point. Kong noted that back before YouTube, “there was nobody that looked like me, even on TV. Maybe ‘M*A*S*H,’ you know, things that my parents kind of cringed at.

“Now, we have ‘Crazy Rich Asians,’ and so many other stories; now, with more representation, kids who look like me can say, ‘I wanna do that!’”

Kong started out as a performer — studied musical theatre at Boston Conservatory — and does act, on occasion, but has made his mark as a director. “The second I started directing, I knew that was what I wanted to do,” he recalled. “It changed the way I saw theatre, that I could shape an entire story, and once I latched onto that, it changed my entire perspective and my place as an artist in this medium.”

He left Boston Conservatory, one semester short of graduation, because he started getting jobs. (“One of the rules, back then, of conservatory was that you couldn’t ‘work,’” he explained.) He went to the San Diego Repertory Theatre, producing and directing artistic collaborations that crossed the border culturally and physically. “People were expecting a Latinx,” he remembered. “I had to win over a lot of people, and I learned the hard way.

“I made a lot of mistakes, learned a lot of lessons. So much of it was about community-building.”

At age 28, Kong went to Seattle’s Northwest Asian American Theatre, becoming a full-fledged artistic director of a large, regional theatre. He found a mentor in the actor, Soon-Tek Oh; best known for voicing the character of Fa Zhou in Disney’s “Mulan.”

“He was the first Korean-American actor,” said Kong, “and the first show I did was with him.” Oh encouraged Kong to come to Los Angeles; their work together developed into the critically acclaimed Lodestone Theatre Ensemble, a nonprofit Asian American organization “where I really cut my teeth on how to develop a grass-roots theatre company. We did some exciting work.”

Kong was Lodestone’s co-artistic director for 10 years, and he did a lot of television work in the interim. “But as 2018 rolled around, I realized I had to get back to what I loved,” he said. “Which was theatre, which took me to New York for a year.” He was helping a friend transition a theatre in New York when the announcement went out: Michael Bobbitt, who Kong had known for years, was leaving ATMTC to take a position as artistic director for the New Repertory Theatre in Watertown, Massachusetts.

“So, I called him up and said, ‘Michael, what’s going on?’” Kong said, laughing. “When he made his announcement, it surprised so many people, including me.”

Kong and Bobbitt had served on National Endowment for the Arts (NEA) panels together, hit it off, became friends and watched each other’s career trajectories. Still, Kong, said, there were a lot of outstanding theatre professionals applying for the position; after what calls “a really intense search process,” he felt honored to be chosen.

“Michael had championed a lot of people,” he said, pointing out that Bobbitt tried to step back and let the ATMTC community make its decision. “I think he was excited that I was one of the people he had championed.

As for the Herculean task of trying to fill Bobbitt’s shoes as artistic director, Kong said that coming into an arts organization with such a strong, vibrant legacy is to his advantage. “The key for me is that there are many ways to move forward, and all the iterations are there for me,” he said. “This is the best possible situation, where he’s moving on to something exciting, and he knows the challenges I’ll face and how to help if he needs to. He’s a resource that is there for me.

“He really was a major pivot for this organization,” said Kong. “How lucky am I to be able to step on the foundation he laid and have confidence that I can make it my own?”

What Bobbitt and his team built at ATMTC is so strong, Kong figures, he can go in any direction. “That’s a great place to be — and that’s one of the reasons I came. These are smart people who love their foundation. They’ll let me know if I’m heading in the wrong direction.”

With that in mind, Kong said he will his first year to get an idea of what the audience wants, see what he wants, and find the overlap. “I want to try to understand my community before I roll out a vision for them,” he said.

But he definitely sees himself becoming part of ATMTC’s strategy of redefining the theatrical process, showing the “how” and the “why.” “We still talk about theatre as this magical mystery box,” he said. “I want to get people excited, demystify the process.”

As for the process of moving his wife and son to Montgomery County, that is underway — but at the moment, he’s enjoying some time in Northern Virginia with his folks.

“A lot of what we used to disagree about seems nostalgic now,” he said. “At the time, there were difficult conversations; we look back at the battles now with so much more understanding.

“This journey as artists,” he added, “is rooted in working hard and doing all the right things until you know how to better tell your story so that people will hear you.”

Especially when your story brings you home again.

For information about Adventure Theatre MTC, visit www.adventuretheatre-mtc.org or call 301-634-2270.