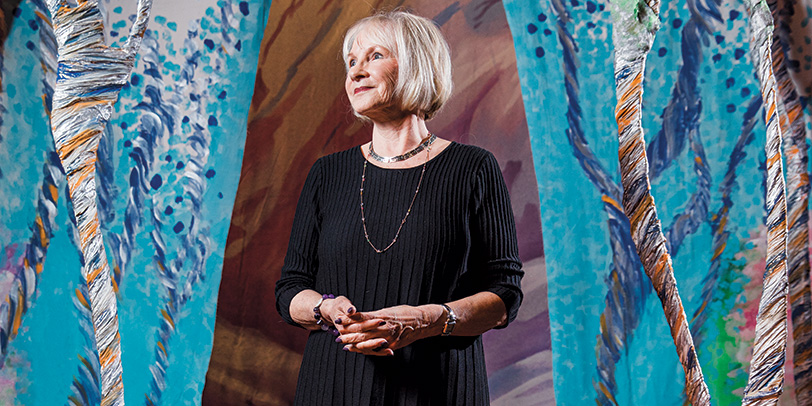 Originally Published in Bethesda Magazine on 02/24/2020 Written By: Steve Goldstein A few years ago, impresario Bonnie Fogel, the founder of Imagination Stage in Bethesda, was puzzling over ways to extend the theater’s reach and broaden…

Originally Published in Bethesda Magazine on 02/24/2020
Written By: Steve Goldstein

A few years ago, impresario Bonnie Fogel, the founder of Imagination Stage in Bethesda, was puzzling over ways to extend the theater’s reach and broaden its base of support. Her success model was the National Theatre (NT) in her native England, which had been transmitting live performances in cinemas internationally.

A saleswoman by training as well as by nature, Fogel placed a phone call to David Sabel, the man who created NT Live. She got right through. “Mr. Sabel,” she began, “I’m Bonnie Fogel, from a little children’s theater outside Washington, D.C., and I’m thrilled at your…”

“Mrs. Fogel,” he interrupted, “don’t you remember me? I was your student.”

Fogel can be forgiven for not recalling the names of all the children who have experienced Imagination Stage. She’s been there from the beginning: Over the last 40 years, she’s seen hundreds of thousands of kids visit the theater company for professional children’s shows and for classes in everything from creative drama/acting to musical theater and filmmaking. At 75, whether she’s giving a tour or wooing a prospective donor, Fogel exudes youthful energy and a sense of parental pride when describing one of the largest facilities on the East Coast dedicated to theater education and professional performances for young people.

The theater’s roots grew out of Fogel’s frustration that her children’s elementary school—Burning Tree in Bethesda—did not offer any performing arts education. In 1979, she and another parent started an after-school arts program and theater workshop in space at nearby Whittier Woods Elementary School, which had closed two years earlier. The startup eventually expanded into the Bethesda Academy of Performing Arts, based in a former dress shop at White Flint Mall in 1992. As executive director, Fogel enlisted the philanthropic support of local arts activist Carol Trawick, who financed a gleaming new theater complex backpacked onto an Auburn Avenue parking garage in Bethesda. The new facility opened in 2003, and in 2018 Imagination Stage generated over $5 million in revenue from its classes, workshops and professional performances, according to its annual report. But despite recent hits such as The Lion, the Witch, and the Wardrobe, ticket sales have declined steadily, causing a recalibration of the balance between education and entertainment.

Yet Imagination Stage is only part of the Fogel narrative, the rest of which reads like a script for the Lifetime channel. Her mother was an unmarried English housekeeper, and Fogel grew up believing that her biological father had died in World War II—until she found out that he was very much alive, and that she was part Jewish and had a sister she knew nothing about. “It completely changed me,” she says. Fogel has two children, David and Sarah, both of whom are married and living in Silver Spring.

After Fogel gave Bethesda Magazine a tour of the facility—including the classrooms, the 400-seat Lerner Family Theatre and the 170-seat Reeve Studio Theatre—we sat in her office amid some of the Helen Hayes Awards won by Imagination Stage productions and photos of her welcoming House Speaker Nancy Pelosi, then-President George H.W. Bush and other luminaries. The Bethesda resident, who announced in February that she will step down as executive director on Jan. 1, talked about the current state of Imagination Stage and explained how her own story finally gave her a sense of self.

Read the full interview at www.bethesdamagazine.com