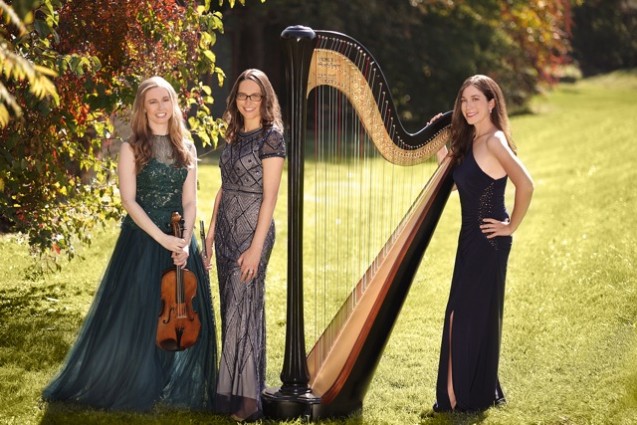 Trio Sirènes Sets Out to Lure and Captivate

When the members of Trio Sirènes get together to rehearse, they typically start off with a cup of tea. Before tackling their latest repertoire, the women catch each other up on their lives and…

When the members of Trio Sirènes get together to rehearse, they typically start off with a cup of tea. Before tackling their latest repertoire, the women catch each other up on their lives and discuss raising their young children.

“It’s nice to have something that fills so many parts of my life, that we can be friends and play together, and look forward to these various concerts together,” said harpist Jacqueline Pollauf. Violist Karin Brown concurs. “I feel like we almost have this psychic connection with each other in terms of our phrasing and our gestures, how we are able to communicate together by playing, by being expressive,” she said. “I think that’s very special and a unique synergy that is a little bit beyond daily life. (Our group is) a wonderful vehicle to explore that.”

The Baltimore-based ensemble will perform the final show of its inaugural 2015-16 season at a 3 p.m. Sunday, May 29 Musical Arts International concert at Calvary Lutheran Church in Silver Spring. The program will feature selections including Sir Arnold Bax’s “Elegiac Trio,” Robert Paterson’s “Embracing the Wind” and Maurice Ravel’s “Sonatine.”

“We have a really lovely variety, something for everyone, a nice sampling of composers,” Brown said. The performance will give the audience an opportunity to see and hear the sounds of the instruments both in combination and as soloists–played away from an orchestra. “You get a live close-up and personal view of these instruments all together,” Brown said. “Each instrument is very ‘soloistic.’ Nobody is in the background in this group.”

Pollauf first saw a harp at age 5, and fell in love right then and there, she said. Although piano lessons came first, she began playing the harp five years later. A substitute harpist for the Baltimore Symphony Orchestra (BSO), Pollauf also serves as a faculty member for several schools, including the Baltimore School for the Arts and American University.

With her mother a violinist and her father, a trumpet player, Brown grew up surrounded by music. “There was always music around, and so it was pretty inevitable that myself and my sisters would start an instrument,” she said. She began playing the violin at age 4 and moved on to viola as a high school senior. Now Brown is an assistant principal violist with the BSO as well as a faculty member at the National Orchestral Institute and the Baltimore School for the Arts.

Flutist Marcia Kämper, the third member of Trio Sirènes, is also second flute for BSO and earned two degrees from the Peabody Conservatory of the Johns Hopkins University,

The women decided to form a trio because all enjoy playing chamber music and found the group to be a wonderful outlet for collaborating in a small ensemble that would also feature solo pieces. “I think the three of us have always gotten along really well,” Pollauf said. “We have good chemistry, both when we are playing and just as friends.” They took their name from Greek mythology; sirens were beautiful but dangerous creatures whose singing lured unwary sailors to shipwreck on the rocky coast of their island.

The trio’s practice of integrating music from different eras into a single performance program is particularly interesting, Pollauf said. The upcoming show, for example, will feature the first major composition for the harp, viola and flute that Claude Debussy composed in 1915. Combined with that selection from the 20th century repertoire, she said, “We will do some modern, really exciting avant-garde music, and also play more traditional music.” After seeing the group perform, Pollauf said she hopes audiences come away with a sense of how very diverse the music for the harp, flute and viola can be.

In addition to scheduling dates for the upcoming 2016-2017 performance season, the group expects to release its first recording on the Analog Arts label, which Kamper co-founded. “We are really looking forward to that, and we are still debating some about the various repertoire, but I think it will also be quite diverse, much like our concert programming,” Pollauf said.

The musicians plan to showcase well-known as well as unknown composers on the recording, which they anticipate will be available later this year or in early 2017. “We welcome new compositions and we are very interested in commissioning composers to write for this ensemble,” Brown said. The trio, Pollauf added, is looking for a composer who is comfortable writing for the different instruments and has the ability to create pieces that are unique and have something new to communicate to the audience–someone to help Sirènes continue to lure and captivate their audiences.